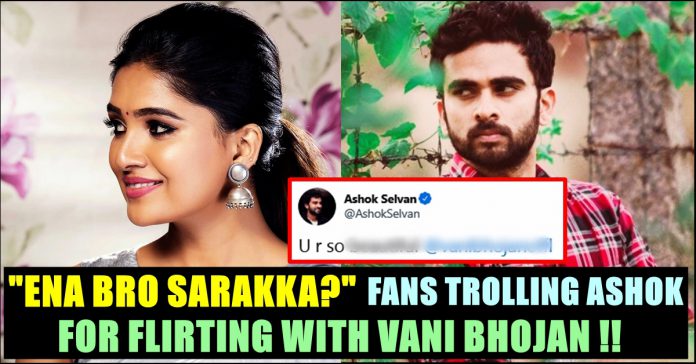 In the film “Oh My Kadavule”, he is going to pair up with “Irudhi Suttru” fame Ritika Singh. The film also has Vani Bhojan as one of the lead. Vani Bhojan who is known for appearing in serials such as “Dheivamagal” and “Lakshmi Vandhachu” is busy in signing films as female lead.

The film’s teaser was released recently and it showed Vijay Sethupathi playing a cameo in the movie. Here’s the trailer of the movie :

U r so beautiful @vanibhojanoffl

Meanwhile Vani Bhojan also posted a tweet saying that Ashok Selvan is a super talented and so hot.

Ashok Selvan is super talented and so hot! Oh my kadavule! pic.twitter.com/TBMdz3yex9

After seeing reactions from their followers, Ashok Selvan made it clear that it is for a game show. “Guys guys guys, CLARIFICATION: it was a dare given on a television show on @ColorsTvTamil for a Deepavali special show with @vanibhojanoffl hosted by @AnjanaVJ !”

Guys guys guys, CLARIFICATION: it was a dare given on a television show on @ColorsTvTamil for a Deepavali special show with @vanibhojanoffl hosted by @AnjanaVJ !
So no, not bodhai 😂 #ohmykadavule ! pic.twitter.com/y9g2IuXAMX

What do you think on these tweets of Ashok ?? Comment your views !!

Previous articleDirector Trolled Both Bigil & Kaithi With Single Tweet !!
Next article“I Did It 24 Years Ago” Vanitha Vijayakumar’s Message To BIGIL Team!!

“How Can You Conclude It As A Conversation Death ?” Follower Questioned !! Actress Replied

Along with a number of celebrities, aspiring actress and former Bigg Boss contestant Sanam Shetty came up with a tweet demanding justice for the...

Preethi Sanjeev, wife of Bigg Boss wildcard entry Sanjeev opened about how Thalapathy Vijay reacted to the participation of his dear friend and about...

Rangaraj Pandey Tried To Crack A Joke After Watching “96 Movie” !! Got Trolled By His Own Followers !!

“Will You Marry Me?” Asked Follower To Nivetha Thomas !! Here’s Her Reply !!

One can easily name the actresses who acted along with both Rajinikanth and Kamal Haasan. Apart from Sridevi, Sri priya, Simran and Jyothika, no...