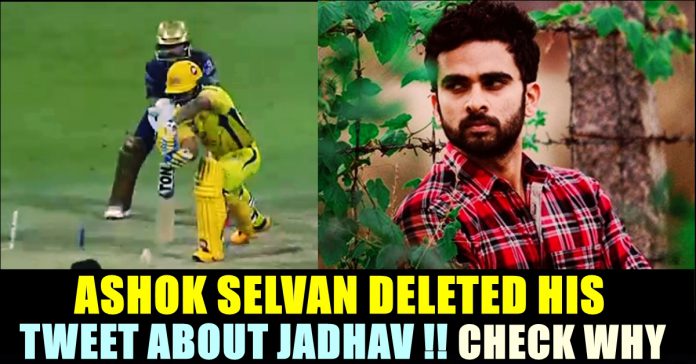 Not only fans, even a number of cricket experts, IPL observers, former cricketers, politicians and Tamil cinema celebrities couldn’t believe what they witnessed in the match that took place between Chennai Super Kings and Kolkata Knight riders. Director Venkat Prabhu who seems to have watched the whole movie wrote “From 10 overs 90 to this!! Heart breaking” in a tweet.

Many other celebrities expressed their disappointment and slammed Kedar Jadhav for his poor performance at a crucial moment of the match. Check out some of the reactions from other known celebrities below :

When Kedar Jadhav came in to bat, CSK needed 39 from 21. He blocked his first, got his first run of his sixth ball. At the time, there was still Jadeja, Dwayne Bravo, Shardul Thakur, Karn Sharma & Chahar to come. ALL of whom can bat. #CSKvsKKR #IPL2020

Thank u so much Jadhav. Nalla varuvinga

Kedhar Jadhav has almost single handedly lost this match for CSK. Just angry. Why on earth is he still playing? 😠😠😡😡😡😡 #cskvskkr #IPL2020

Something is missing with #csk 🙁😞😔😢#KKRvCSK

Omg can't believe this! Where was #bravo? Unbelievable, said it earlier @ChennaiIPL still need to finish! Well played @KKRiders brilliant bowling by russel and narine in the death! #CSKvsKKR #IPL2020

This is so disappointing for #CSK’s middle order. From 90 for 1 in 10 overs to losing by 10 runs. This is so rare from #CSK. Can someone give me a valid reason why we still stick with Jadhav ? What’s his role in the team ? #KKRvCSK

Why #kedhar didn’t run for the last over first ball ? Is he Thinks as a game changer 2 smash sixes. 🙁 #KKRvCSK

Meanwhile actor Ashok Selvan who is known among Tamil audience for his appearance in “Soodhu Kavvum”, “Oh My Kadavule”, also posted a tweet slamming Jadhav’s performance. Through a tweet, the actor expressed his wish of getting Raina back in the team. He also said that he wants Jadhav to be sent back to India in the same flight.

“I miss Raina!! Just get him back and please send back Jadhav in the same flight” his post read. He posted his opinion as his Instagram story as well.

However, after few minutes, Ashok deleted the tweet and regretted for posting such tweet against an individual. He said that he got a bit emotional as a fan of CSK. “since I was a sportsman and played competitive sport, I somewhere felt I shouldn’t have said that about Jadhav” he said in another tweet and wished CSK to come back stronger.

Hmm since I was a sportsman and played competitive sport, I somewhere felt I shouldn’t have said that about Jadhav. The fan in me got a bit emotional I guess. Everyone has their bad day! Anyway, I really hope #Csk comes back stronger! Cheers 🙂

On seeing this tweet, followers of the actor asked him not to feel bad as what he said is right. Few even appreciated him for seeing the situation in Jadhav’s perception. Check out some of the reactions Ashok received :

Best tweet i have come across after all the present negativity around #csk tonight ! I can just imagine the pain jadhav might be going thru now. He has been a key player, yet just one league match failure has earned him so much of hatred. #csk will bounce back stronger 🌹

Good sprit. Evan I prepared to scold you for that Tweet. But, now I’m really happy for this apologise. You are great👍🏼

Its not about bad day. Its about intent. Doen’t matter if he would have got out on 0. But he was not even trying to hit. You cant defend balls when 38 is required in 21 balls and knowing bravo is yet to bat. This is just disgusting. Csk lost important 2 points bec of him😡

Comment your views on this spirit of the “Thegidi” actor !!

At last actor Saravanan started to let know people what's on his mind after his controversial termination from the Bigg Boss house. Saravanan made his...