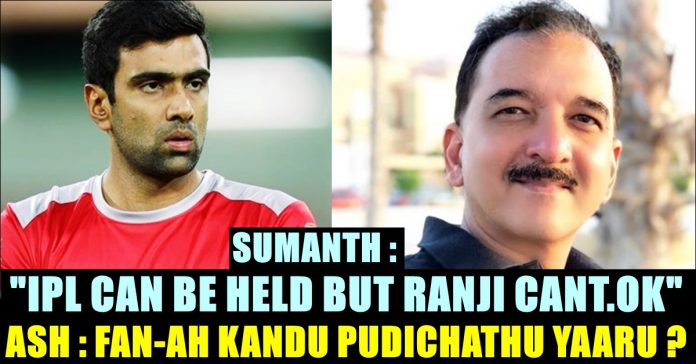 For the first time in 84 years, Board of control for cricket in India decided not to conduct country’s premier first class domestic tournament Ranji Trophy. BCCI president Sourav Ganguly and secretary Jay Shah felt that a two month long bio bubble even for a truncated two-phased Ranji trophy in times of the COVID 19 pandemic wasn’t feasible.

It is reported that country India conducted the tournament even during World War 2 while other countries cancelled and this is the first ever time that the country is cancelling the Ranji Trophy.

#RanjiTrophy with over 150 matches per season of four or more days duration cannot be completed in a few weeks as can be done with limited over cricket. With so many protocols in the place, it's impossible to conduct it this season. Therefore the right call has been made.

As soon as the news broke out in media, Sumanth Raman, popular sports commentator who is known for hosting a sports based quiz program in DD national channel and for the comments he is making about Tamil nadu politics through official twitter hanle, came up with a tweet criticizing the decision of BCCI.

He questioned why BCCI decided not to conduct the domestic tournament while IPL tournament is scheduled for the March month. “#RanjiTrophy cannot be held this year due to #COVID19 but #IPL2021 can be held in India. OK.” his tweet read.

#RanjiTrophy cannot be held this year due to #COVID19 but #IPL2021 can be held in India. OK.

Ravi chandran Ashwin who saw this tweet of him, came up with the reference of a popular Vadivelu comedy to make fun of the comparison Sumanth made. To denote that his comment is irrelevant, Ashwin uploaded the picture of actor “Vennira Aadai” Moorthi and wrote “Fan ah kandupidichadhu yaaru?? Table ah kandupidichadhu yaaru??” which is a dialogue uttered by Moorthi to Vadivelu in a comedy scene.

Sumanth who couldn’t get the tweet of Ash, seeked clarification from him. “Felt like the comparison between ipl and Ranji trophy was irrelevant. Also the challenges of hosting a Ranji trophy for 38 teams in these times (bubbles) etc is humongous.” the cricketer replied to make Sumanth understand his opinion on his tweet.

Felt like the comparison between ipl and Ranji trophy was irrelevant. Also the challenges of hosting a Ranji trophy for 38 teams in these times (bubbles) etc is humongous.

Check out his next reply to a fan who trolled Sumanth :

IPL 2021 is reportedly going to start on April 14 after the Vijay Hazare Trophy and a One-Day women’s tournament. The Board of Control of Cricket in India and the IPL GC have almost zeroed in on a tentative date. According to a source tracking the developments closely confirmed that the final would be held on June 5 or 6.

Comment your views on this hilarious replies of the spinner !!

Previous articleAnitha Exposed A Girl Who Constantly Abused Her !!
Next article“Pure Hatred Against One Man” – Theatre Owner On Govt. Allowing 100 % Occupancy In Theatres

After Rajinikanth's tweet on "Karuppar Kootam" issue surfaced, several reactions are pouring in Internet platforms from every direction. A hashtag saying “கந்தனுக்கு_அரோகரா” is...

Kalidas & Other Celebrities Penned Emotional Notes On The Demise Of Vismaya !!

Demise of Vismaya, a 24 year old Ayurveda medical student who lives in Kerala left the entire Internet devastated. She died by suicide in...