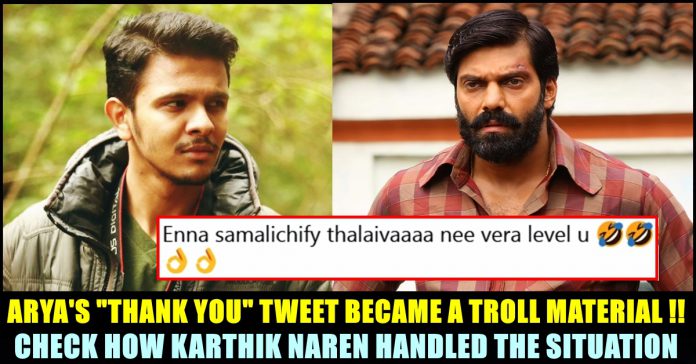 Days ago Karthik Naren used the screen shot from “Sarpatta Parambarai” to announce about his ome back through the upcoming anthology series “Navarasa”. Arya who played lead role in the Pa. Ranjith directorial, was thanking his film industry friends who lauded his movie through his tweets and made a “Thanks” reply to Karthik as well. The tweet of Arya became a troll material among the Internet users and many memes emerged trolling Arya’s reply tweet. However, in a way of putting a full stop to the trolls, Karthick Naren replied back to Arya explaining how inspiring the role Kabilan was.

It all started after Naren posted a screen shot that took from the trailer of the recently released period sport drama “Sarpatta Parambarai” which had actor Arya in the lead role to announce about his come back. In the scene, Arya would say that it is the right time for him to prove himself in front of everyone. Karthick uploaded the screen shot with an hashtag that said “Navarasa”, a Netflix anthology film in which Karthik made one of the stories and deleted it later.

Among the 9 films, Karthik Naren had directed a film titled “Project Agni” by having Aravind Swami and Prasanna in the lead roles. Music composed by Ron Yathan Yohann, the film also contains Poorna in one of the main roles. The project was produced by veteran filmmaker Mani ratnam under his “Madras Talkies”.

The filmmaker who is just 27 years old, is considered as one of an important director among the new gen filmmakers. On Friday, the filmmaker, in a way of replying to the criticisms he received for his previous film “Mafia”, came up with the screen shot from “Sarpatta”. Check out his post below :

The post garnered wide reach in no time. With many encouraging the filmmaker for his confidence level level, we could see a number of Twitter users trolling him. Actor Arya, on seeing the tweet, replied writing “Thank you so much brother” by adding heart emojis.

Thank you so much brother 😍😍🤗🤗 https://t.co/MZakz4HPnC

Check out some of the reactions this tweet of Arya received :

In a way of putting full stop to these trolls, Karthick came up with a tweet writing “‘Kabilan’ is an inspiration & one of my favourite protagonists of all time brother. Hats off to the entire team & your dedication” as a reply to Arya’s reply tweet.

‘Kabilan’ is an inspiration & one of my favourite protagonists of all time brother. Hats off to the entire team & your dedication🤗❤️ https://t.co/tH1b6Dj6ge

However, fans couldn’t be calm as they continued to troll saying that Naren handled the situation well. Here’s some of the comments :