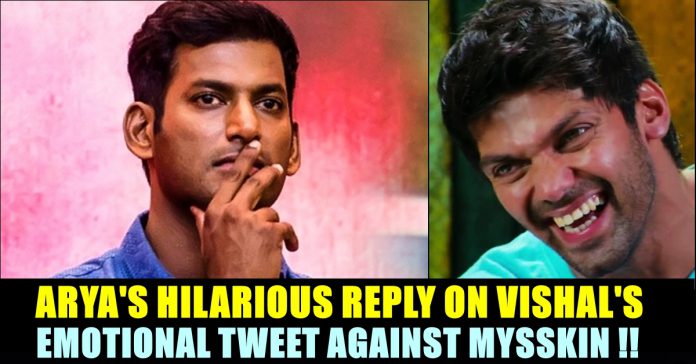 Actor Arya, dear friend of Vishal reacted on the rift between the “Sandakozhi” actor and Mysskin regarding the making of “Thupparivalan-2”. The first look of Vishal’s debut directorial Thupparivalan 2 released on the evening of Wednesday. The film which was supposed to be directed by Mysskin, is a sequel of 2017 blockbuster film Thupparivalan in which Vishal and Prasanna played the lead roles. Several media portals reported that the demands of director Mysskin to Vishal Film Factory is the reason behind the rift between the duo.

Vishal film factory is the movie production house of Vishal himself which was established in the year 2013. Now the demands made by Mysskin got leaked in online which is doing rounds in social media platforms.Vishal and Mysskin shared a healthy friendship between them for quite a long time. To our shock, Mysskin suddenly opted out of the project and it was announced that Vishal is going to take over the project as Director. To clear the air, Vishal even made a press release against director Mysskin.

Now, on seeing the press release, actor Arya posted a happy tweet encouraging his dear friend. Arya said that Vishal is more than capable of directing a movie. Further he even expressed his wish of acting in Vishal’s second directorial. “Congratulations macha, u r more than capable, It’s time, Wishing you the best. #VishalDirection2 with me” he wrote in his tweet.

Arya and Vishal acted together in Bala’s critically acclaimed “Avan Ivan”. Vishal made a guest appearance in Arya’s Vasuvum Saravananum Onna Padichavanga” as well. Both of them are known for their strong bond in film industry. For reacting in a cool manner for such big issue, Arya received many reactions for his tweet. Check out some of them below :

“Is it wrong if a producer pinpoints the mistakes of a Director during the production of the film, for its betterment especially when close to 15 lakhs INR per day was spent for a 3 or 4 hours of shoot in UK ? No” Vishal said in his statement. “I still wonder because it’s as bad as you abandon your own kid an orphanage” he added.

“Does the director even remotely know the interest incurred and the troubles the producer goes through to make ends meet during the process of Filmmaking ?” Vishal asked through his press release. In a list of Mysskin’s demands to work in Thupparivalan 2 which was leaked online earlier, we could see the filmmaker demanding Rs.5 crores as his salary excluding GST.