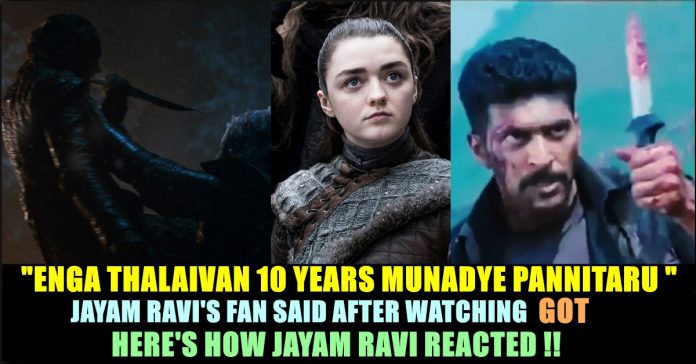 As you probably already know, Arya Stark saved the entire damn world in Game of Thrones’ latest episode by defeating the Night King, winning the Battle of Winterfell, and assuring the future of humanity.

Some fans thought she came out of nowhere, but her destiny’s been building for a long time. Death has guided Arya Stark’s every move in the series, from her service in the House of Black and White to bringing death to many—brown eyes, green eyes, and now blue eyes, as Melisandre tells her in “The Long Night.” When Arya stabs the Night King at the 11th hour in the Game of Thrones episode “The Long Night,” it was a shocking relief for the high tension of seeing most of the show’s fan-favorite cast overwhelmed by the sheer mass of undead. But showrunners David Benioff and D.B. Weiss explain that they’ve known about the twist for three years now, and they’ve been foreshadowing it in the series since 2016.

As there are many Game of Thrones fans making posts and memes about the latest episode, a fan of Tamil actor Jayam ravi discovered something unbelievable. The way Arya Stark switched the knife from one hand to another by dropping it was already did by our very own Jayam Ravi in the movie Peranmai to get rid of the villain.

This was came to the actor’s knowledge when one of his fan shared both the videos by compiling it. The fan who is named as Atlee Karthick shared the video and captioned it as “enga thalaivan 10years munadiyae panitaru 🔥 ” (My hero did it 10 years ago)

This grabbed the attention of Jayam Ravi himself who replied to with a “Coolers wearing” emoji :

Peranmai is a 2009 Tamil-language war adventure film, co-written and directed by S. P. Jananathan. The film revolves around a tribal forest guard who works for the welfare of his tribe and spreading education among them. Whilst, on a team bonding mission with five college girls, whom initially mistreat him due to his caste, they stumble on a group of foreign mercenaries who are planning to stop India’s scientific progress by destroying a rocket launch by using missiles. The fight which was shown in the above video is a scene where Jayam Ravi kills one of a foreign mercenary.

Jayam Ravi, is Kollywood actor who is known for films like Something Something Unakum Enakum, Peranmai, Thani Oruvan etc. The son of veteran film editor Mohan, Ravi made his debut as an actor in the romantic drama film Jayam which gained him the stage name of Jayam Ravi. The actor also worked as an assistant director for Kamal Haasan’s aalavanthan movie.

Jayam Ravi was last seen in a action thriller movie named as Adanga Maru and to be seen in a movie named Komali. What do you think on this comparison ?? Comment your views below !!