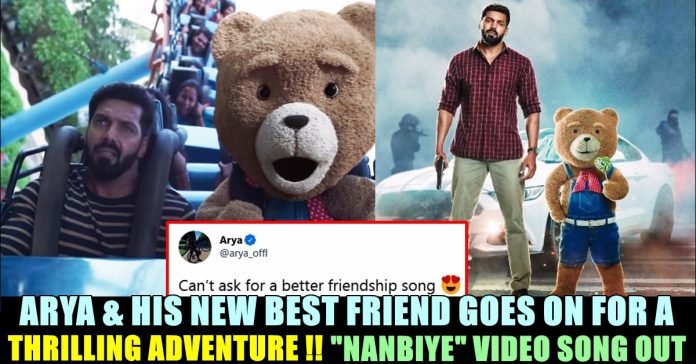 Through the song, it is revealed that Arya is treating the “Teddy” as his female friend which is something we haven’t seen in Tamil cinema often. The film’s plot is based on how an ordinary man and his toy friend “Teddy” are solving a medical mystery by going through an adventurous journey.

The recently released “Nanbiye” song, visuals of which were beautifully captured by the film’s cinematographer Yuva, gives us a glimpse on the mischievous antics of “Teddy” that she is going to do throughout the film. Arya who played the role of a regular office-going apartment resident, enjoys the company of “Teddy” and says that she is his “new friend” when his mother asks why he is always carrying it with him.

The desire of sharing makes us long for a true, everlasting friend in our lives and having a friendship with someone “real” is an excellent prescription for all kinds of physical and emotional pain. It can be difficult to find people with similar interests and values and becomes even more harder during adulthood, when responsibilities like career, education, and family care severely limit one’s social life. In the song “Nanbiye”, Arya manages to sustain a strong, deep friendship with his lifeless “teddy”, behaviour of which competes with the qualities of a human friend.

The protagonist feels extremely happy while spending time with his “Teddy” as she completely accepted him for who he actually is. He goes on for a walk with her in beaches and accompanies her in the adventurous rides of a theme park like we do with our “real” friends. They also watch movies together and we could see them fighting over the widely debatable “Thala-Thalapathy” rivalry. To make it evident that she is someone who has emotions, the makers have made a scene showing “Teddy” wiping her tears while watching an emotional scene from Ajith’s “Viswasam”. The protagonist loves to share his both tears and laughter with his teddy and treats her as his soul mate.

The lines “Everything is an illusion! you are the only reality”, “Am I even real ?” or a mere doll in your hands?” written by Madhan Karky to cite the perception of the protagonist sums up the entire relationship between the duo. The song which shows Arya verbally communicating with the “Teddy” also features comedy actor Sathish. Through the montage sequences, we could also understand that Arya and Sathish are the only individuals who are aware of the special abilities of “Teddy”.

Watch the song’s promo below :

Composed by D. Imman, the song’s lyrics were written by Madhan Karky. The animated fantasy action film which was directed by Shakthi Soundar Rajan is a direct OTT release and is scheduled to release from March 12 on Disney + hotstar. Along with Arya, Sayyeshaa, Sathish, the film is going to have successful Tamil filmmaker Magizh Tirumeni in an important role. The supporting cast of the film includes Bigg Boss season 3 fame Sakshi Agarwal and Karunakaran. After Superstar Rajinikanth’s “Kochadayan”, “Teddy” became the second Indian film to use the motion capture technology extensively.

Previous articleKamal Got Brutally Thrashed For His Statement About “Abdul Kalam” !! Watch The Original Video Here
Next articleStory Of “Nenjam Marappathillai” Belongs To This Famous Actor & Dance Master ??

In an unexpected turn of events, Junior Kuppanna located in Nungambakkam faced an accusation from their customer about serving rotten Biriyani. Karthik who went...