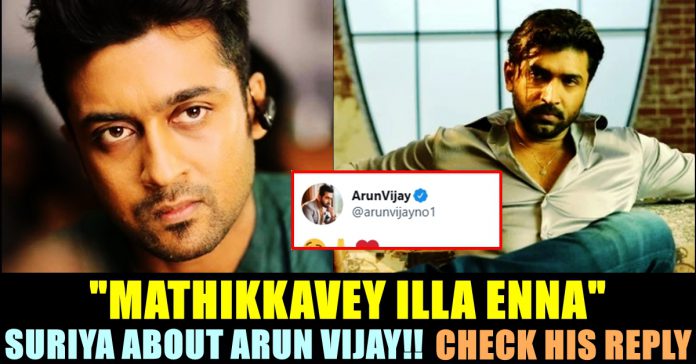 Arnav Vijay, son of actor Arun Vijay, will be making his acting debut with a film produced by Suriya’s 2D entertainments. Directed by Sourav Shanmugam, the film is said to be a fun filled kids film, that also focuses on a boy’s relationship with his pet dog.

“Seeing Jayam Ravi’s son in Tik Tik Tik kindled my son’s interest to venture into acting and we were waiting for the right script for Arnav. When Shanmugam approached us with this script, we couldn’t say no” said Arun Vijay about his son making debut.

The director of the film had revealed that Arun Vijay and Vijayakumar will be playing Arnav’s onscreen father and grandfather. The makers are also looking for a powerful antagonist for the film and updated that the tone of the film will be non-preachy and fun, on the lines of Disney films.

Suriya who is producing the film is a dear friend of Arun Vijay since very long time. They went to the same college where Suriya was a senior for Arun Vijay. Photos and videos of the duo embracing each other did rounds in social media platforms on the day of the event took place.

How Many of you know that

Meanwhile, an old video of Suriya sharing some loveable moments of himself and Arun Vijay during their college days was shared by a fan of actor Suriya. The “Soorarai Pottru” actor who participated in the audio launch of Arun Vijay’s 2009 action film “Malai Malai”, encouraged him and could be seen suggesting him to wait for the right time.

He also shared when he met Arun Vijay for the first time and revealed how he tried to do “ragging” as Arun was a junior to him. “I met him at the college first. At first, after hearing that Vijayakumar sir’s son is joining the Loyala college, I was waiting to “rag” him. However, I managed to meet him only during the noon. After seeing him, I asked him to do the 360 degree kick. He was standing there like he swallowed something. I insisted him to do it repeatedly but he didn’t respect my words” said Suriya. “He never did it till the end of college. It was a shame” he added in a humorous tone.

Watch the video shared by the fan below :

Further Suriya encouraged Arun by saying that no actor is better than him. “I don’t think any other actor is fitter than Arun in our industry right now. A small time factor worked out for us and things fell on right place for us. We are all waiting for one good film from you as you have no aversion” Suriya said to Vijay in the function.

Arun vijay is currently busy with a number of projects such as “Boxer”, “AV31”, a film with director Hari, Agni siragugal etc. Since his “Thadam” became a blockbuster, the level of expectation on Arun Vijay’s upcoming projects became high. Meanwhile, Suriya who was last seen in “Soorarai Pottru” is currently working with Gautham menon for an anthology film. He is expected to join hands with Vetri Maaran soon for “Vadi vasal”.

Previous articleVJ Rakshan Finally Opened On The Allegations Against Him !!
Next articleThis Bollywood Series Mocked The Looks Of Dhanush !! Tamil Fans Got Angry

Veteran journalist Nakkheeran Gopal, editor and publisher of Tamil political investigative journal Nakkheeran, is the one who made the horrific Pollachi sexual harassments public...

Renowned filmmaker Gautham Vasudev Menon, in a face to face interview with journalist Rangaraj Pandey, chose Vijay while answering to a question on whom...