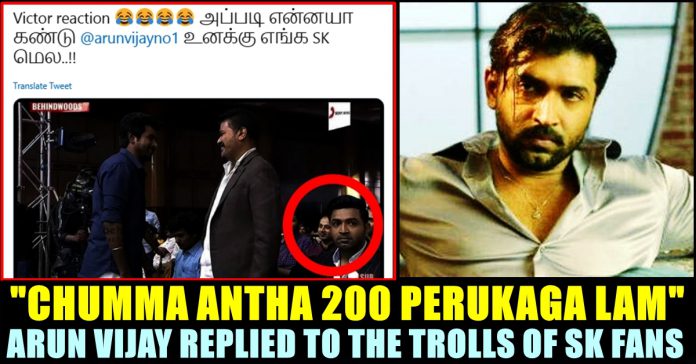 Arun Vijay has replied to the fans of a particular actor who are making negative comments against him in the micro blogging social media site. He said that he couldn’t jump into conclusion by considering the hatred spewed by just 200 or 300 people in Twitter. Arun Vijay has became one of the busiest actor in Kollywood since “Ennai Arinthaal” The actor who is basking in the success of his last film “Thadam” has a handful of films awaiting for their release. The actor has opened about the negative comments he is facing in Twitter in the promotional interview of his upcoming film “Mafia” which was directed by Karthick Naren.

Though Arun deleted it immediately deleted, the screenshot of it went viral across the Internet.

Arun Vijay even clarified to the users of Twitter that the tweet was not targeted on Sivakarthikeyan. He made it clear that his account was hacked to his fans and followers. But still many fans are considering both the actors as rivals. (Also Read : These Reactions On Arun Vijay & Sivakarthikeyan’s Encounter Are Hilarious !! WATCH !!)

Now in a way of replying to them, Arun Vijay, in the interaction said “Every actor would face negativity when they are growing. There will be other actors and their fans. Just because 200 to 300 people are spreading hatred against us, we should not grasp it. That’s what I tell my fans as well. ‘If they are doing it with a misunderstanding, let us keep it aside and concentrate on our work’ is what I tell to my fans. I like all the actors and respect their work. I never underestimated any newcomer. Even if he is a smallest actor, I will be the first person to appreciate him.”

Arun Vijay, formerly known as Arunkumar is the only son of veteran film actor Vijayakumar and has been active in the Tamil film industry since 1995. His recent release ‘Thadam’ shows an upward trend at the box office. Thanks to the positive word of mouth, the number of shows and screens got increased during its release time. Apart from Mafia, Arun is going to be seen in Agni Siragugal and a film with Magizh Thirumeni.

Ace Tamil actress Rohini who is known for acting in films across South India, registered a Police complaint through online against self proclaimed political...

Along with hashtags ""PSBB", "Ban PSBB", a number of twitter spaces took place during the evening of Monday regarding the complaint that emerged against...

Gautham Menon’s long awaiting films Dhruva Nakshathiran and Enai Nokki Paayum Thotta are going to see the light finally, according to the tweets of...