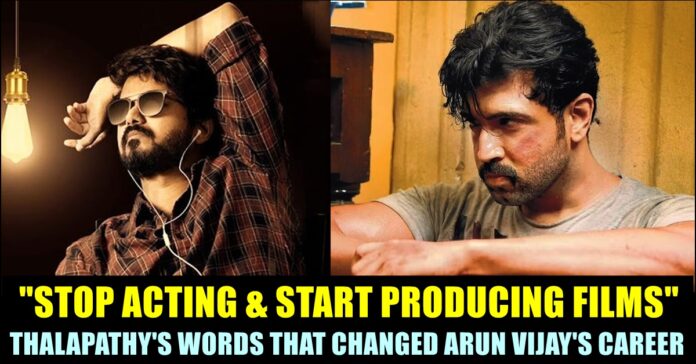 Arun Vijay Opened About Thalapathy Vijay’s Role In His Comeback !!

In his recent interaction for a media channel to promote his upcoming film “Sinam”, actor Arun Vijay opened about how Thalapathy Vijay played a huge role in his come back as an actor in the industry. Arun said that he was planning to become a producer after his films as an actor didn’t go well at the box office. When he went to Vijay’s house to ask for his call sheet, the actor encouraged him to continue as an actor.

Narrating about an incident where he met the top actor, Arun Vijay said that people outside and his family members suggested him to stop acting and produce films as he had huge gaps between his films as an actor and they didn’t go well among the audience as well. Accepting the criticisms, When Arun asked Vijay for his dates to produce a film, the “Thuppakki” actor got shocked.

“It doesn’t matter who says what. You fight better than me, I have always talked about you to my friends. You are far much better, it’s just the time. Don’t feel down, it will happen. You have asked my dates, I will talk to my father about it. But don’t bother about others, you will definitely come forward. You have that in you” Vijay said to Arun Vijay at that time.

“I became a bit emotional after he talked that way. He showed me his new house after that. We had coffee together” said Arun and went on to share about how he felt after reaching his car. “I decided not to get distracted from acting field. After reaching house, I said to my family that I have asked Vijay as per their suggestion and asked them to leave me to lead my own way” Arun Vijay said.

“That gave me huge encouragement. I always think about that day with him. Thanks to him for pushing me towards the right path when I was in a low” Arun Vijay said.

On the work front, Arun Vijay who tasted success through “Chekka ChivanthaVaanam”, “Thadam”, “Yaanai”, is currently promoting “Sinam” and is expected to be seen in a film named “Borrder”.

“What Should I Do With This Rose ??” Student Slammed Government !! WATCH

A student who returned from Ukraine slammed the Indian government for not taking precautions on saving him and other students who were stranded in...

“We Want Him Back” – Madan Fans After His Arrest

Video of Madan's fans raising voice against the arrest of him doing rounds in social media platforms. They said that Madan's motivational speeches encouraged...