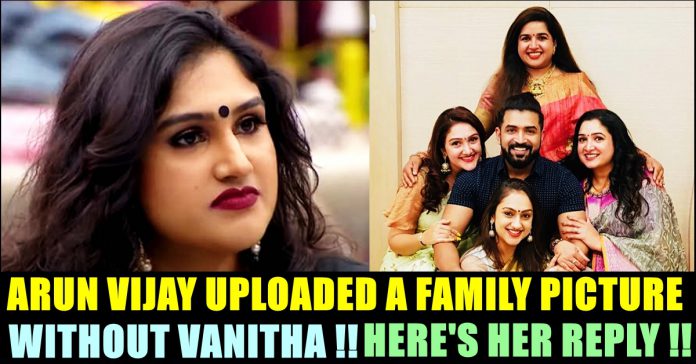 After coming out of the Bigg Boss house, Vanitha is pretty active in social media platforms, especially in Twitter. Few Months back, Vanitha’s brother and popular actor Arun Vijay posted a picture of him with his family members. However, Vanitha Vijay kumar could not be seen in any of the picture.

Check out one of the picture here :

Many of his followers, questioned Vijay about the absence of Vanitha Vijayakumar. They felt that the picture would complete only if she took part in the photograph session. Check out few of their replies :

Vanitha akka missing in this reunit, but arun sir please think about vanitha akka, she is also one of your sister.

In a recent interview with Cinema Vikatan, Vanitha opened on this post of Arun Vijay. “Everything happens because of our time. Something is terribly wrong. If it is me, I would not accept to take a picture like that and post it in social media. Even the people whom I don’t know personally are valuing my emotions. But it hurts to realize that my siblings didn’t care. I cared for them. For Preetha, I took care of her till her last movie “Alli Arjuna”. Right from taking care of her make-up to giving her food in shooting spot, I cared for her more than for myself. Every actor and director who worked with her know this.” said Vanitha who got emotional.

When the host of the show asked Vanitha whether Arun Vijay is angry with her, Vanitha politely denied it and said that it is Vanitha herself who has all the reasons to get angry against her family members.

Aishwarya Rajesh Posted A Picture & Asked Everyone To Guess Him !! You Will Be Surprised To See This Transformation !!

Aishwarya Rajesh is one of the finest actress today. She is the one who has appeared in leading roles primarily in Tamil cinema. She started...

Doctor Sharmika, through her latest YouTube video, replied to the trolls and criticisms that she has been facing due to the claims she made...