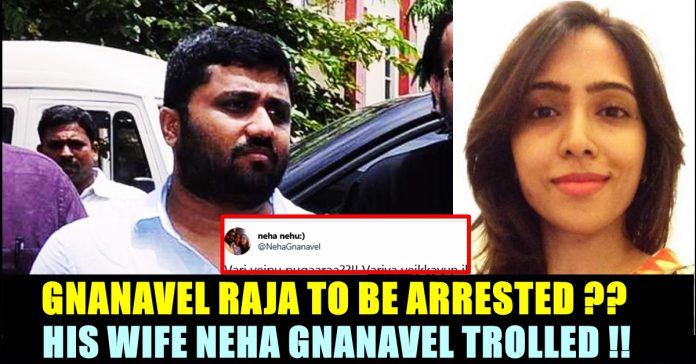 Producer Gnanavel Raja who is responsible for his production house Studio Green, is known for producing many films in Kollywood such as Singam 3, Thaana Serntha Koottam, Madras, Mr.Local etc. He is also known for his bold statements regarding the injustice that occurs in Tamil film industry.

Two days ago, several news portals reported that a non-bailable arrest warrant has been issued against the producer for concealing his income. The case was filed against him at the Chennai Egmore court by the Income Tax department, said the reports.

According to the prosecution, M Sheela of the I-T department said that Gnanavel Raja was charged for the concealment of income and evasion of taxes, besides various unaccounted cash payments made during the financial years of 2007-08 and 2008-09.

The Income Tax Department had conducted various searches at his premises and found that he had concealed his income in the returns filed previously. After the searches, the producer had filed revised returns and admitted certain amounts for the various unaccounted cash payments made.

Though court ordered the producer to make his presence several times, he reportedly remained absent. Accepting the petition filed by the Income Tax Attorney, court has issued a warrant against the produced and postponed the hearing of the case to 27th of November.

Meanwhile, on the day of the news surfaced, Neha Gnanavel Raja, wife of the producer has posted a tweet in her official twitter account. In her tweet, Neha completely denied the allegations and slammed the news channels for publishing such news.

Gnanavel Raja recently recently filed complaint against Simbu in Tamil film s producers council for his absence in the shooting spot of his production venture “Mufti”. Gnanavel reportedly faced a huge loss due to the absence of Simbu which made him to file the complaint, though he has a good bond with the actor as friend. There are news doing rounds about the film being dropped as well.

Gnanavel also filed a case against Kamal Haasan in Tamil film producers council by requesting them to get back his 10 crores. In the complaint registered, Kamal Haasan allegedly borrowed 10 crores from Gnanavel Raja to sort out the problems raised during the release of his Uththama Villain film. However Kamal Haasan’s production house Raaj Kamal films, later released a press statement by denying the allegation completely.

“Is That Ajithkumar??” Samantha Can’t Keep Calm After Watching This Video

Wicket keepers getting caught on stump mic is not something new to the fans of game cricket. But when it comes to MS Dhoni,...

First look of the most awaited upcoming film of actor Vijay released in Internet and fans couldn't keep calm. Along with fans, celebrities of...