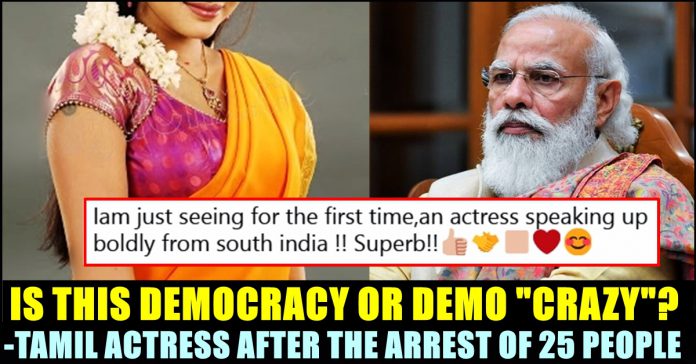 Tamil actress and former Bigg Boss contestant Oviyaa uploaded a tweet condemning the arrest of people who criticized Prime minister Narendra Modi through plastering posters. In her tweet, she added an hashtag saying “Arrest Me Too” and whether it is democracy or demo “crazy”. Her tweet garnered wide attention among the users of the micro blogging social media site with many supporting the actress by dropping positive comments beneath her post.

On Sunday, The Delhi Police arrested 25 individuals and registered First Information Reports against them for pasting posters condemning Narendra Modi for allegedly exporting vaccines to foreign countries which were meant for the children of country India. The content of the posters they used read “Modiji humare bachon ki vaccine videsh kyu bhej diya” which is translated as “Modiji, why did you send vaccines of our children to foreign countries”. The posters were plastered in the walls of several part of the city, reports said.

12 Arrested Over Posters Against PM Modi In Delhi

India has been reporting 3 lakh plus COVID 19 positive cases a day over the past three weeks. The infrastructure of the country’s health care system crumbles, leaving many prominent hospitals without hospital beds, oxygen and other medical facilities. Many people including the members of opposition party accused Prime minister Narendra Modi and his governance for allegedly mishandling the crisis and for focussing on maintaining a good image.

The recent arrests for involved in plastering posters irked many as it resulted in the twitter trending of “Arrest Me Too”. Many users including the prominent members of opposition party uploaded tweets with the hashtag. South Indian actress and former Tamil Bigg Boss contestant Oviyaa uploaded a tweet in her official twitter account questioning the freedom of expression in country India.

“Is this democracy or democrazy ??? ArrestMeToo” Oviyaa asked in her tweet which garnered thousands of likes and retweets in no time. Check out her tweet below :

Is this democracy or democrazy ???#ArrestMeToo

Oviyaa is known for her outspoken attitude since her Bigg Boss stint and she gained a separate fan base for that one ability alone. She also made a cheeky comment criticizing the Modi-government recently and it grabbed headlines as well.

Check out some of the reactions for her recent tweet below :

In the show, the actress attracted the audience through her bold statements and gutsy decisions inside the house. The actress confronted with almost all of her housemates inside the Bigg Boss house, including experienced dance choreographer Gayathri Raghuram and senior comedian Ganja Karuppu. However the actress couldn’t make use of the fame she gained through Bigg Boss show as her movies after that show didn’t go well. But the fan base of the actress stayed the same and she continued to speak her heart out in public, especially in social media platforms.

Previous article“This Is So Unfair” – Film Fraternity Consoles Arunraja Kamaraj After His Wife’s Demise !!
Next articleNakkhul Replied To A Girl Who Spewed Hatred At Him Based On The Bigg Boss Jodigal Show !!