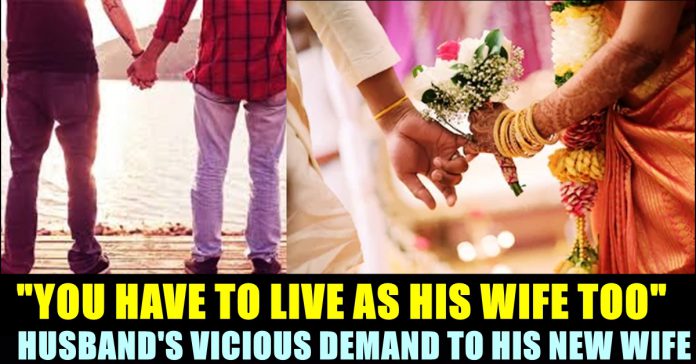 A news update on an arranged marriage that took place in Andhra Pradesh failing in a miserable way is trending in social media platforms. While parents of Indian country are having highest belief in arranged marriage and in NRI grooms, this news came in as an absolute shock to them.

Bhaskar who belongs to Andhra Pradesh’s Guntur district, was working in United States after getting the country’s citizenship. Parents of the 30 year old planned for his marriage and fixed a 25 year old girl from Guntur. After the engagement, the marriage took place on 18th of March with close relatives and friends in simple manner, according to Polimer news.

Family of the bride gave Rs. 50 lakhs cash as dowry with 70 pounds of Gold. After the marriage, the girl who got married to Bhaskar got shocked with the strange behaviour of Bhaskar. He constantly refused to have sexual intercourse with his newly married wife by stating various reasons, according to reports.

After one and half months, the depressed girl informed about her husband’s abnormal activities to her parents through her friends. Shocked parents, complained about it to the parents of Bhaskar. When the two families gathered together to sort out the issue, Bhaskar reportedly kept mum. He refused to talk to them initially but started revealing about his true self after compulsion.

Bhaskar told them that he is involved in live-in relationship with a guy in US for past 4 years. Shocked wife, left to the place of her parents. During a recent meeting with his wife, Bhaskar offered her an option if she wants to continue her marriage life with him. He reportedly said that he is ready to take her with him to America only if she accepts to live as wife for himself and for his live-in partner in US.

The girl’s parents who came to know about this vicious mindset of the groom they decided, registered a police complaint in Guntur suburban. The investigation is currently underway, according to reports. After this news came to light, users of social media are advised the Parents to inquire about the groom they are choosing for their daughters. Few even blamed them for looking for an NRI groom when there are many unmarried youngsters are looking for bride in their own state.