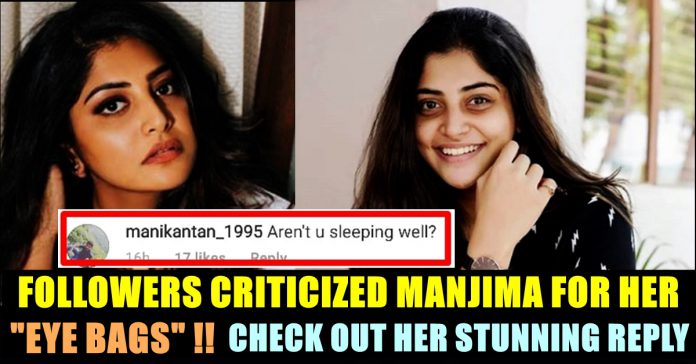 Followers trying to interact with their favourite celebrities is something which is very common nowadays. Some praise them to get the response by posting comment in their social media posts and some would have the guts to abuse them. In this post of Manjima Mohan in which she posted a picture of herself with no-makeup, majority of her followers noticed the dark circles around her eye and questioned about it.

In the picture, she added a caption saying “Life is tricky! So stay in your magic 💫”. Check out her post here :

Life is tricky! So stay in your magic 💫 📸 @kiransaphotography

Most of the Instagram users surprised to see Manjima Mohan without make-up and made comments about the eye bags and dark circles she got.

In a way of replying to all of them, Manjima took time to make them understand why she posted this picture. While replying to one of the suer, she said “yes and I have no problem in flaunting it also ! I think we all should be proud of our wrinkles and eyebags 😁”

Check out the other pictures of the actress flaunting her features without makeup :

My favourite watch from @danielwellington is now available for him and her. Enjoy matching watches with your partner. Plus, use my code DWXMANJIMA to get a 15% off on your purchase from the DW website or stores. #danielwellington #dwindia

In 2017 she had two Tamil Films opposite to Udhayanidhi Stalin[8][9] and Sathriyan opposite to Vikram Prabhu. In 2019 , she made her come back to Malayalam with Mikhael opposite to Nivin Pauly for the second time. She has replaced Amala Paul in Zam Zam , official remake of Queen. She also has a few Tamil films in her kitty.

Mumbai all rounder Jimmy Neesham's tweet on confessing about his poor performance in their last league match is going viral among the users of...

Chennai Super Kings have been in fine form throughout the IPL 2019 thus far and members of the Yellow Army are now taking up...

Senthil Balaji, minister of Electricity, Prohibition and Excise made a hilarious reply to a popular netizen who made a complaint about a damaged Electric...