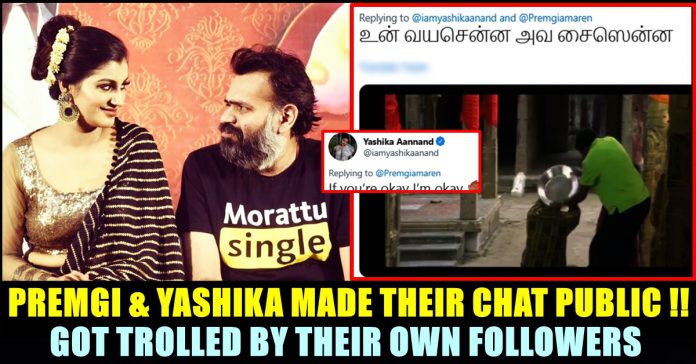 Premgi Amaran who is known among tamil cinema audience for his appearance in his elder brother Venkat Prabhu’s films, has composed music in number of films. Recently, he done music composition for comedy horror film “Zombie” which hit screens today.

The film is written and directed by Bhuvan Nullan. Yogi Babu and Yashika Aannand are featuring in the lead roles, while Manobala Youtube fame Gopi, Sudhakar and Anbu Dasan are playing pivotal roles.

And it’s a wrap up on the sets of #zombie !! So happy to be working with @iYogiBabu !! Fan of his dedication n humour ! Amazing human being ❤️ #comingsoon pic.twitter.com/BGiDjCaSKL

This film also marks Yashika Anand’s first film after coming out of Bigg Boss house. As the movie is releasing today, Premgi Amaren posted a tweet tagging Yashika along with a youtube link of one of the song from the movie.

To this tweet, Yashika replied by writing “If you’re okay I’m okay 🙈”

Followers of both of them trolled them hilariously for making this conversation in public. Check out some of the reactions here :

Vinayak Shiva, who debuts as a director with this yet-to-be-titled film, says that he would rather label his maiden venture as a ‘naughty’ horror-comedy than an adult-film. “I was very particular that not to end up being offensive or derogatory while writing the script. There will be lots of perky fun and atypical scares, but not at the cost of hurting anyone,” he adds.

Yogi Babu, who has become the staple of Tamil horror-comedies in recent times, is playing a ghost in Vinayak’s film. However, the filmmaker is quick to state that the comedian’s character, unlike in his earlier films, will be more sinister and ruthless. “The character goes on a vengeful killing spree. In many ways, you could say he is playing a negative character with a comical twist.”