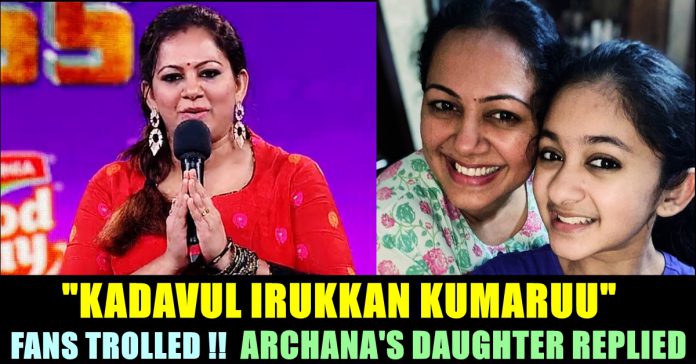 Archana Chandhoke got officially evicted from the season four of Kamal Haasan hosting Bigg Boss show. She who got nominated with Aari, Shivani, Somashekar, Rio, Anitha Sampath and Aajeedh, got eliminated from the show after receiving less number of votes from the viewers of the reality game show. Now, after her eviction, Zaara, daughter of the TV host came up with a social media post writing a caption related to her mother’s journey inside the house. She also replied to a number of her followers who showered love on her mother.

Archana, while getting evicted, said that she expected to stay inside the house only for 40 long days and expressed her happiness for staying longer than that. She said that she feels happy for getting evicted from the house as she managed to get a chance to meet Kamal Haasan in person. “I didn’t get the opportunity of meeting you while entering, it feels happy now” she said.

“For me, it is a long period of time. When they contacted me first, I thought that staying forty days inside the house is a big achievement. I have been very honest. People who are close to me know about it. To those who are accusing me of using “Love” as a strategy, I want to say that I am using it as a strategy since I was born. Love is god and that is how I played my game” said Archana to Kamal Haasan while getting evicted. She who met the participants through “Agam TV”, wished every individual the best to win the competition.

Now, after her eviction, Zaara who is enjoying 1.5 lakh plus followers in Instagram, uploaded a selfie with her mother. The selfie showed the duo smiling happily facing the camera and Zaara added a caption writing “My Bossy Kumaru is back and I’m lovin it!!! Kadavul Irrukan Kumaru! ❤️✨” and her hashtags read “love #spreadlove #backwithme #bossykumar #anbuunmaidakumaru”

“You spread love in house. We wish you luck ! Zara post the video of her entering into home” wrote a fan in the comment section of the post to which Zaara replied writing “sure! Will do that❤️❤️❤️”

Check out some of such comments and Zaara’s replies to them :

She also replied to negative comments and criticisms. A follower trolled Archana’s eviction by commenting a popular phrase “Kadavul Irukkaan Kumaruu” used by Archana inside the house with laughing emojis. Check how Zaara replied to them :

Archana Chandhoke is widely known for anchoring TV shows such as “Ilamai Pudhumai”, “Kalakka Povathu Yaaru”, “Sare gama Pa” and others. She gained huge acclaim after interviewing Superstar Rajinikanth for Zee Tamil channel after 2.0 release. She got married to Vineeth Muthukrishnan on 7th of May, 2004. The couple are having a adorable daughter named “Zaara” and Archana posted many pictures with her daughter in her official Instagram account in which she enjoys 8 lakh plus followers.

To prevent Coronavirus from spreading across Tamilnadu, chief minister Edappadi Pazhaniswamy ordered to shut down all the Cinema theatres, malls, schools and colleges. As...