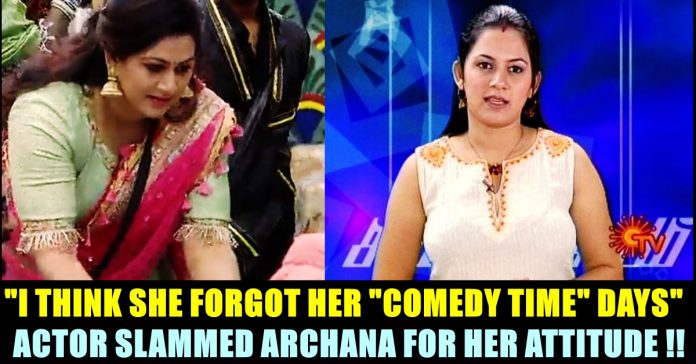 Archana Chandhoke who is known for hosting TV shows entered the Bigg Boss house as the 16th contestant. She was welcomed by the contestants who were already living in the house. As soon as entering the house, Archana started roasting the contestants as she was watching the show from outside for past 10 days. On seeing her attitude towards Suresh Chakravarthy, actor Shiva kumarr, grandson of veteran actor Shivaji Ganesan expressed his disappointment through a tweet.

Suresh Chakravarthy, the eldest participant of the ongoing season, made his acting debut in the year 1991 in K Balachander’s “Azhagan” featuring Mammootty, Babu priya and Geetha in pivotal roles. In the film, Suresh played a role named as Agarabannu sokku. Before entering the Bigg Boss house, Suresh was busy making cookery videos for his youtube channel. Through his Instagram account, Suresh called himself as an Actor, Anchor, Writer, Director, YouTuber.

Now, on seeing Archana teasing him after making her entry into the Bigg Boss house, Shiva, posted a tweet criticizing Archana. The “Singakutty” actor said that Suresh Chakravarthy was one of the very few people who had straight access with Mr. Kalanithi Maaran of Sun network. He also worked as a head supervisor of Sun network in their early days, Shiva says.

Shiva also revealed that Suresh is the director of the popular television caller show “Pepsi Ungal Choice”. After disclosing these details, Shiva who said that he couldn’t remember Archana’s name, took a dig at her by saying that she forgot her “Comedy Times” says. “Comedy Times” is a show that got telecasted in Sun TV during early 2000 and Archana worked as one of the anchor in it.

“Mr.Suresh was one of the few people who had straight access with Mr.Kalanithi Maran! Mr.Suresh one of the head supervisors of SunNetwork in their early days & director of Pepsi Ungal choice!I think Mrs.Chandoke or whatever her name is forgot her “Comedy time”days” his tweet read.

Mr.Suresh was one of the few people who had straight access with Mr.Kalanithi Maran! Mr.Suresh one of the head supervisors of SunNetwork in their early days & director of Pepsi Ungal choice!I think Mrs.Chandoke or whatever her name is forgot her "Comedy time"days #BiggBossTamil4

This tweet surfaced in Shiva’s twitter account after Archana humorously trolled Suresh Chakravarthy by imitating him. She who took “Aarthi” for him in a sarcastic manner, said that he deserves to be a TV anchor, referring to a task.

Check out some of the reactions for Shiva kumarr’s tweet :

Also bro he is the former manager for navarasa nayagan karthik he is a television host like jodi porutham, Tik Tik Tik which came in early 1990's acted in azhagan movie as sokki director of Pepsi ungal choice innum iruku ivar pathi solla he is a legend 😎😎 #SureshChakravarthy

Previous articleTop Actress Supports Vijay Sethupathi In “800 The Film” Controversy !!
Next articleDhoni’s Reason For Not Bringing Bravo In The Last Over Didn’t Convince Fans !!

Aishwarya Rajesh is an Indian film actress, who has appeared in leading roles primarily in Tamil cinema. She started her career as Anchor in...

Mumbai Indians pulled off a dramatic last-ball win against Chennai Super Kings in the final of the Indian Premier League to record their fourth...

Actress’s Controversial Statement On The Death Of 20 Year Old Tunisha!!

On Saturday, a 20 year old actress named Tunisha Sharma was found dead on the sets of her Television show. The actress reportedly hung...

Asal Kolar Blamed This Contestant For The Trolls He Received!!

As the show is nearing it's end, contestants who got eliminated during the initial weeks of the ongoing season of  Bigg Boss show, started...