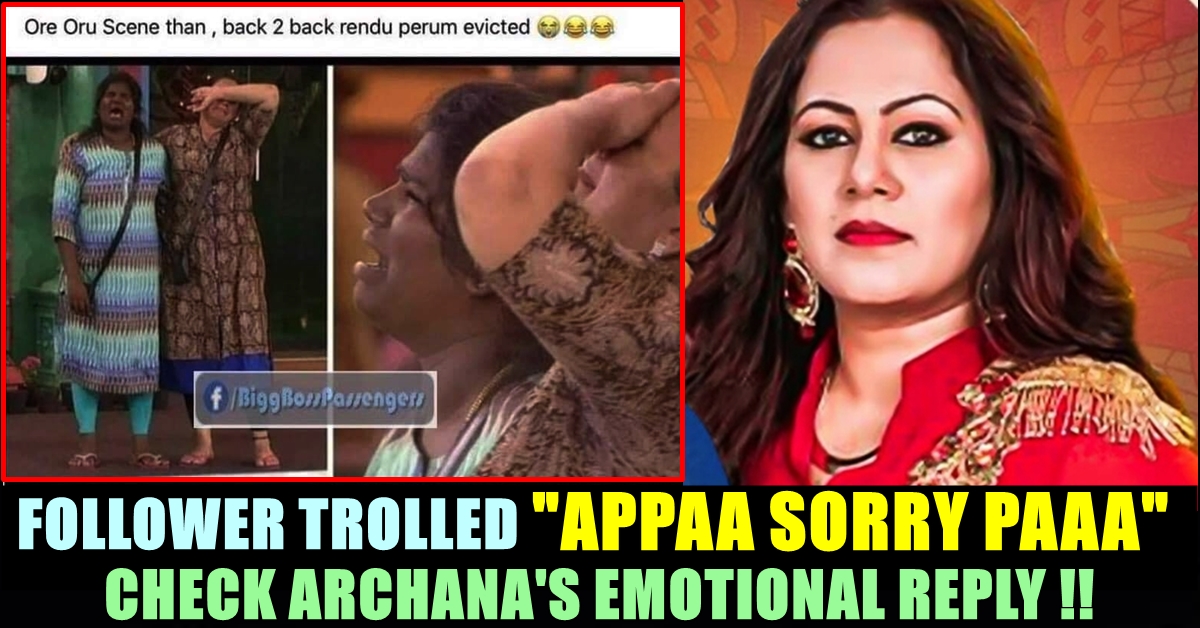 After getting eliminated from the house, anchor Archana is pretty much active in social media platforms. Most recently, she uploaded a picture of herself with her co-contestants Jithan Ramesh and Aranthangi Nisha in her official Instagram account with a caption saying “The bonds of friendship that we forge along the way in our lives help us to navigate even the toughest of obstacles with ease. Muzhgaatha shipae friendship thaan. Love you guys !!!”

She also uploaded a video of herself entering her house after spending 60 plus days inside the Bigg Boss house. In the video, she could be seen embracing her family members with love and affection.

Archana Chandhoke is widely known for anchoring TV shows such as “Ilamai Pudhumai”, “Kalakka Povathu Yaaru”, “Sare gama Pa” and others. She gained huge acclaim after interviewing Superstar Rajinikanth for Zee Tamil channel after 2.0 release. Archana, while getting evicted, said that she expected to stay inside the house only for 40 long days and expressed her happiness for staying longer than that. She said that she feels happy for getting evicted from the house as she managed to get a chance to meet Kamal Haasan in person. “I didn’t get the opportunity of meeting you while entering, it feels happy now” she said.

“For me, it is a long period of time. When they contacted me first, I thought that staying forty days inside the house is a big achievement. I have been very honest. People who are close to me know about it. To those who are accusing me of using “Love” as a strategy, I want to say that I am using it as a strategy since I was born. Love is god and that is how I played my game” said Archana to Kamal Haasan.

Now, days after getting evicted from the show, Archana seems to have watched all the episodes in hotstar. After uploading a post in Facebook, Archana expressed her frustration while replying to a follower. The follower insisted Archana to re-enter the house again through wild card. Archana immediately replied by saying “Ayyoooooo !! Vendaam Saami.. very happy in my heaven”

Another follower said that Aari is the title winner through his comment and Archana replied to him saying “Yeah Cheers” which is believed to be a sarcastic reply.

Another followed uploaded the picture of Nisha crying “Sorrya Paa” and stated that they both got evicted due to that episode. Check how Archana replied to him :

Archana got married to Vineeth Muthukrishnan on 7th of May, 2004. The couple are having a adorable daughter named “Zaara” and Archana posted many pictures with her daughter in her official Instagram account in which she enjoys 8 lakh plus followers.