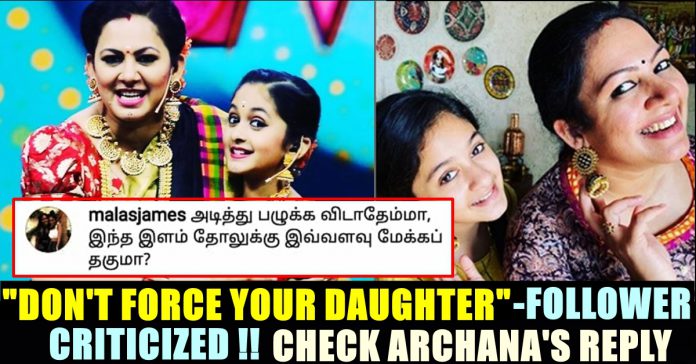 Archana Chandhoke Replied To A Harsh Comment On Her Parenting !!

Anchor Archana who is widely known for anchoring TV shows such as “Ilamai Pudhumai”, “Kalakka Povathu Yaaru”, “Sare gama Pa” in Zee Tamil, once gained huge acclaim after interviewing Superstar Rajinikanth for Zee Tamil channel after 2.0 release. The busy anchor who is pretty much active in social media platforms amidst this ongoing lockdown situation, replied to a harsh comment she received in Instagram lately.

Archana Chandhoke got married to Vineeth Muthukrishnan on 7th of May, 2004. The couple are having a adorable daughter named as “Zaara” and Archana posted many pictures with her daughter in her official Instagram account in which she enjoys 5 lakh plus followers. Check out some of them below :

Pics that don’t need captions!! Anbu makkaley, Zaara has only one insta profile and it’s @zaaravineet.offl .. there are atleast 10 more accounts in her name but they are all impersonations/ fake ids or fan pages.. pls send in your love in abundance to @zaaravineet.offl .. all other accounts, pls change the names soon!!

I’m a big lover of Jhumkas… and I can’t stop thanking @happypique for these super pretty jhumkas.. With @zaaravineet.offl in the house, I’m sharing my favourites!! Thank you so much @happypique for making our lockdown super special !! Love you guys

In one of her recent posts, uploaded a comment asking Archana not to force her daughter to wear so much makeup in such young age. “Don’t force her, Is it healthy for her young skin to bear that much makeup ?” the follower asked by writing “அடித்து பழுக்க விடாதேம்மா, இந்த இளம் தோலுக்கு இவ்வளவு மேக்கப் தகுமா” in Tamil. The bio of the one who posted this comment says that she is a mother of four beautiful girls.

On seeing this comment from her, Archana immediately replied by saying that her daughter is only wearing “earrings” not make up. She asked her to try in a better way to spread hate next time. “make up ah?? She is only wearing earrings!! What’s wrong with you?? Hate spreading?? Better luck next time” Archana’s reply read.

Posting mean things as comments under the posts uploaded by known personalities only to hurt them and to get likes from people who have similar mindset has became a common practice in this online era. It also became one of the easiest ways to get temporary attraction among the fellow online users. It is high time for such online users to realize that it is not going to get them anywhere further.

Previous article“Trisha Is Surviving Only Because Of Her Caste”- Meera Mithun !!
Next articleVishal Facing Severe Criticism For Sharing The Medicines That Cured Him From COVID 19 !!

Samantha Opened About Surrogacy For The First Time!!

During the promotional interview of her upcoming film "Yashodha" which revolves around crimes that are taking place surrounding women who chose to give birth...

Crowd From The Stadium Chanted “ROHIT, ROHIT” !! His Gesture Winning Hearts On Internet !!

If Virat Kohli is the most important player in the Indian cricket team, Rohit Sharma is one of the strongest pillars for the team...