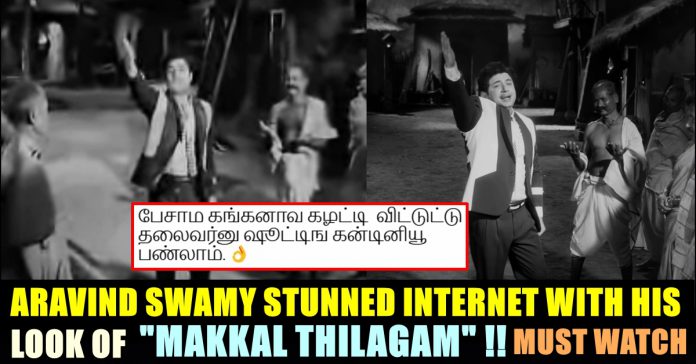 On the day of former chief minister and actor MGR’s birthday, the crew of “Thalaivi” movie has released the look of Arvind Swami who played the role of the leader. Aravind Swami who is known for his refined acting has stunned the internet with his appearance as M.G.R who is a cultural icon in the state Tamilnadu and is regarded as one of the most influential actors of Tamil cinema. He was popularly known as “Makkal Thilagam” (People’s King) as he was popular with the masses. Today is his 103rd birthday which is being celebrated by his fans and followers across the state.

Sharing a two pictures of himself as MGR, Aravind Swamy in his official twitter account wrote “Here is my first look as Puratchi Thaliavar, Makkal Thilagam MGR in #Thalaivi . A teaser follows at 10.30 am today. Hope u like it 🙏”

Here is my first look as Puratchi Thaliavar, Makkal Thilagam MGR in #Thalaivi . A teaser follows at 10.30 am today. Hope u like it 🙏 pic.twitter.com/LjnN6Ybwrw

Followed by this, the makers of “Thalaivi” also provided a glimpse of Aravind sami as MGR through a short teaser. It shows the making of MGR’s popular song “Naan Ungal Veetu Pillai” in black and while. Aravind Sami who resembles MGR so much with his dance moves, goes out of the frame after singing the final line as exactly as the legendary actor.

These looks of Aravind Swami as MGR stunned the internet users as he looks so much like MGR unlike Kangana Ranaut who miserably failed to resemble the titular character. Along with the several netizens Actress Kasthuri, Reshma Pasupuleti also lauded the actor’s effort to portray the iconic role.

Wow!!! Cant believe my eyes… looks like MGR alive again…You got every detail, look and body language perfect… too good ! 👏👏👏

However, The first look and teaser of Kangana Ranaut starrer “Thalaivi” revealed recently only to disappoint the fans. Being made as a biographical picture of Thalaivi J. Jayalalitha, it was directed by “Madharasapattinam” fame A.L Vijay. The one and half minute teaser showed the younger and older version of late chief minister J.Jayalalitha.

It looked more like an animation character and many of the twitter users who saw the teaser neither felt Kangana nor Jayalalitha in it. They started making fun of both teaser and first look as it does not compete with the reality as far as the looks of the lead is concerned. Now after seeing these looks of Aravind Swamy, many stated that they got a reason to watch the movie.

What do you think on these looks of Aravind ?? Comment your views below !!

Previous articleJulie Uploaded Picture Of Herself From Jallikattu Protest !! Check These Reactions !!
Next articleVettri Maaran’s Answer To Assistant Director Who Asked About Vijay Goes Viral !!

A twitter user who claims to be a film critic through his bio, reviewed Ponniyin Selvan three das before the film's release and his...

As soon as Board of Control for Cricket in India announced the squad for the upcoming Australian tour, mixed reactions has been pouring in...