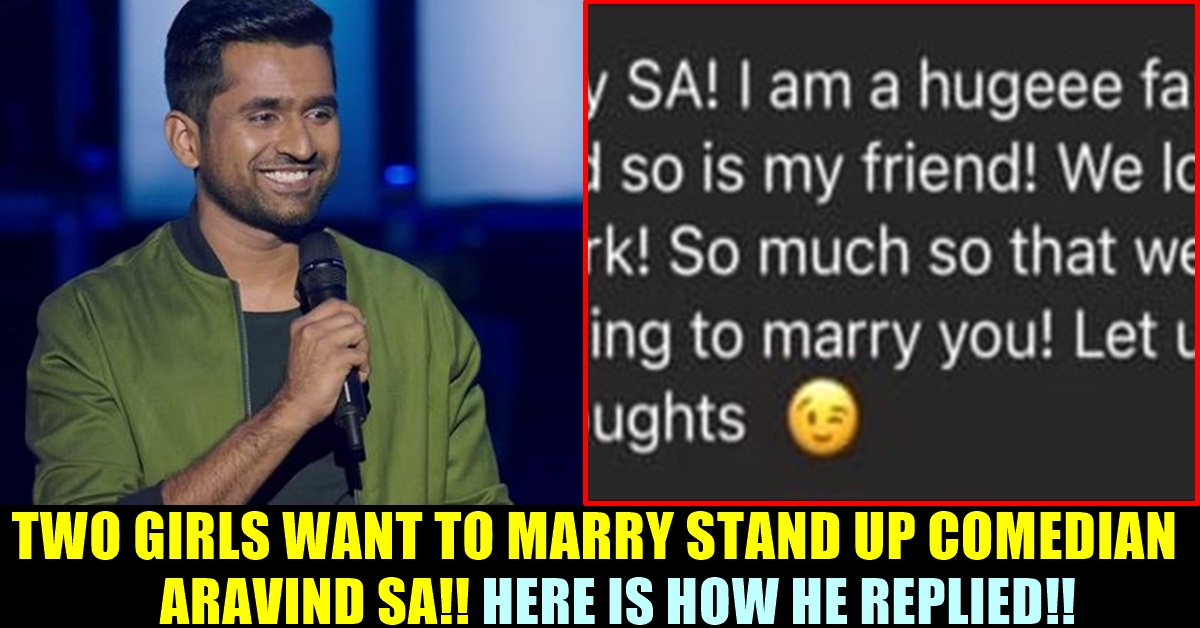 Aravind SA, a famous stand-up comedian uploaded a story on his Instagram. These stories have reassured all of us that the comic has got a lot of girl fans. The proposal made by a girl has gained his attention due to its weirdness.

Aravind SA has a huge fanbase for his stand-up comedy shows. He has the heart of all the youngsters, especially girls. His criticism of Lungi Dance, especially made him rise to fame. Shows like Madarasi Da, I Was Not Ready Da have gained him many fans. The comedian is active on Instagram and shares posts, stories and at times asks for suggestions from his followers. He also never hesitates to give back to the comments and messages he receives on his posts and in his inbox.

Often people ask him about being single and he also replies to them. Recently Aravind SA uploaded stories on his Instagram handle. In the story, is a screenshot of a girl, on behalf of her and her friend have proposed Aravind SA to marry him. She has mentioned, “We are even willing to marry you.” This has made him feel that this should be exposed.

Aravind SA has uploaded his reactions on how feels about seeing the message. In the videos, Aravind has said about the double proposal and has said he wants to know her friends who accepted for doing this. He did not stop with his video he has also posted a meme video too.

Aravind has also replied to the direct messages he has got in reply to these stories. He has said to all those guys who are cursing him on receiving double proposals by posting a video clipping from the movie Vasuvum Saravananum Onna Padichavanga.

Actor Vijay Gets Slammed For Filing A Case Against His Parents!!
TN FM PTR Reacts To Fake Allegations That Were Made Against Him !!