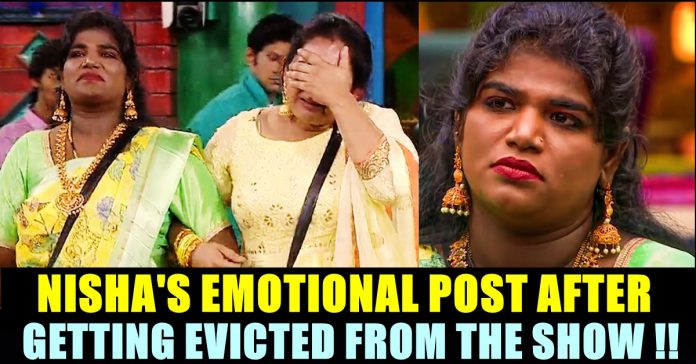 Aranthangi Nisha, after getting evicted from the show, uploaded a video of herself entering her house after 70 long days in her official Instagram account. Her family members could be seen welcoming her by performing “Aarthi” ritual. While uploading the video, Nisha added a caption saying that she who never thought of hurting anyone, got hurt now.

“Aranthangi” Nisha, a stand up comedian by profession, entered Vijay TV as a contestant in “Kalakapovathu Yaru show” and got the opportunity to participate in the Kamal Haasan hosting show. In the 69 days she stayed, the stand up comedienne failed to impress the audience as she restricted herself within a group that consisted Rio, Archana, Soma shekar and Jithan Ramesh.

Though her simplicity, spontaneity and humour sense were loved by fans, the attitude of Nisha who always said that she wants Rio to win the game didn’t go well with the audience. This nature of Nisha made people to think that she is not a deserving contestant to be in the finals as a result of which she got evicted from the show along with Jithan Ramesh due to the less number of votes she received.

Now, after getting out of the house, the comedienne came up with a post in her official Instagram account where she is enjoying three lakh plus followers. The post shows a video of her family welcoming her after 70 long days. She could be seen hugging and kissing her son who welcomes her with a flower bouquet. They also performed “Aarthi” ritual for Nisha and bought a cake which said “Welcome to Home, Love you”

This video received enormous number of likes and reactions. A follower named as Vinayagam asked Nisha to continue being a stand up comedian and advised her to learn from experience. That comment garnered 500 plus likes and Nisha replied to it saying “Sure ma”

Previous articleA Set Of People Trending Hashtag Against RJ Balaji !!
Next articleInternet Trolls The Youngsters Who Boasted Their Castes !!

Raj kundra, a Mumbai based businessman and husband of pan Indian actress Shilpa Shetty has been accused of making pornographic content in a couple...

Mayilswamy Annadurai, famous Indian scientist who is known as Moon man of India, n an interview with Thanthi TV, has said that "Panjangam" won't...

"Love Today" movie became a subject to huge accolades from fans and experts of Indian film industry. Pradeep Ranganathan who directed and performed in...

Bigg Boss ultimate, an OTT version of the celebrity game show is going to get streamed from the end of this month and the...