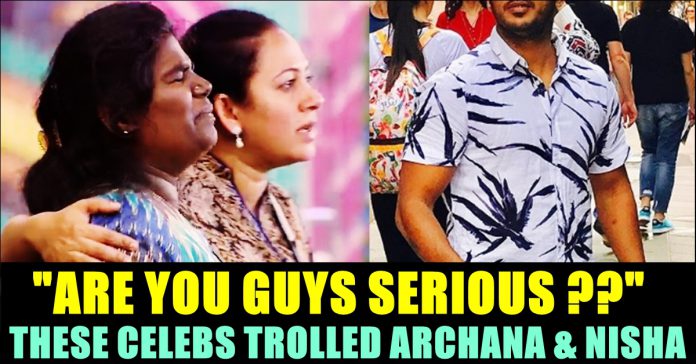 Archana Chandhoke and Aranthangi Nisha became a subject to online troll due to the emotional bonding they displayed on the Wednesday episode of Bigg Boss season 4. It all started when Bigg Boss conducted a task asking housemates to divide into teams as robots and humans. He said that the humans should make the robots to express human emotions in order to win the task.

Nisha tried to break Archana emotionally as they both played human and robot respectfully on the Tuesday task. After trying so many methods, Nisha decided to remind Archana about her father’s death to make her cry. Archana who said that it didn’t affect her mentally during the task, broke into tears after one point.

Nisha also cried saying that she didn’t mean to hurt Archana in that way. She tried to make Archana stop crying but Archana looked extremely upset. Once the task got over, Nisha fell on Archana’s lap and cried seeking apology. Archana didn’t want to talk about it and asked Nisha to forget.

“Your father is my father Archana. You are my blood sister. I never thought of breaking you. You are important to me that much in this house. I even apologized to our father after finishing the task” Nisha said to Archana while crying.

After a while, Archana called Nisha to eat but the latter refused to go saying that committed a big mistake. “Slap me if you want to. He is my father too.” Nisha again started criying. “Stop crying. See, he himself came down as rain” said Archana to Nisha to convince her. They both looked at the rain and cried. “Sorry paa” Nisha cried at the rain.

On seeing this gesture from the duo, followers of the Bigg Boss show started reacting to it in social media platforms. Actor Shiva Kumar, grandson of leendary actor Shivaji Ganesan and husband of former Bigg Boss contestant Suja Varunee, uploaded a post trolling both of them.

Nisha and Archana are u guys serious ?

He also asked when Archana would get out of the house and trolled their emotional outcry.

Veteran Actress Sri Priya who is also following show from the beginning, trolled them by tweeting “Mudyalaye Saami” ( I can’t bear this, God)

Many other followers also expressed their frustration over Archana and Nisha who took the task too personal and made the episode look so boring. Comment your views on these reactions !!

Nearly 3 months back, to our shock a video has been surfaced on internet through a twitter ID named Raman Sharma Magic where the...