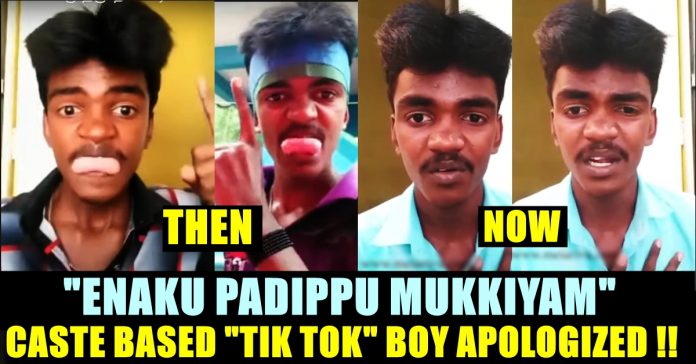 Looks like TikTok is the new way to record any video in a smartphone. In Tamilnadu, people in the rural parts making use of the app more than the people in urban. There is a very slight chance that anyone using a smartphone may not have come across a Tik Tok video showing a young netizen lip-syncing to a song. Launched in 2016 and originally called Musically, TikTok is one of the most popular apps today. Last year, it was also one of the most downloaded apps on Google Play and Apple Store.

Users of Tik Tok are calling themselves as “Musers” and it has been informed that they are conducting a meet-up occasionally in which they share awards and spend time together by doing Tik Tok videos. In a way of elevating their innovations to next level, many users started to do Tik Toks by doing somersault, magic videos, tricks etc. There are also a separate set of “Musers” who do Tik Tok videos based on their caste. In those videos, we can see the youngsters glorifying their respective castes. In a world which is saying that caste system would not exist in the upcoming generation, most of these “Musers” looks like they are in their late teens or early twenties.

Check out the videos here :

The boy who is in the above video is Muthu who is studying in 11th standard. As soon as uploading these kind of videos in Tik Tok app, they went viral across internet. Now he  posted an apologize video saying that all castes are same and he needs every caste to survive.

“The tik tok video I posted about caste was uploaded by someone in Youtube. Everyone making fun of me since it got uploaded in Youtube. I am studying 11th standard and I want to study 12th standard further. Please help me for my education. My parents are very much worried because of my activity. I belong to Tirunelveli, Alangulam. Even my friends are not happy with what I did. People from all the caste are my relatives and I require every one of them to live. I won’t do this again and I don’t intend to divide them.” said Muthu in his apologize video.

Tamil Nadu Information Technology Minister M Manikandan recently said in the state Assembly that the Tamil Nadu government will approach the Centre to ban the mobile app, TikTok. This comes after Nagapattinam MLA Thamimun Ansari from the AIADMK raised the issue and said that the app is “damaging” to the Indian culture.

Previous articlePriya Anand’s New Pictures Are Too Hot To Handle !! Prashanth Gets Trolled By The Actress For Trying To Troll It !!
Next articleBIGG BOSS Saravanan Answers To A Question On Joining Rajinikanth’s Political Party !! WATCH !!

Actress Divya Bharathi’s Emotional Reply To The Comments That Surfaced On Her Body Type !!

Actress Divya Bharathi of "Bachelor" fame, on Thursday, came up with a long post in her official Instagram handle, venting her emotions out on...

Television actress Mahalakshmi who recently married producer Ravinder Chandrasekhar, in an interview with Sun Television, answered to a question on whether she married him...