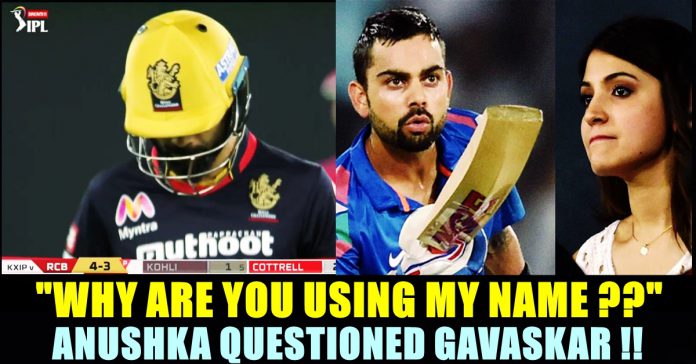 Anushka Sharma came up with a long write up in her official Instagram account after hearing Sunil Gavaskar’s Hindi commentary during the match between RCB and Punjab. She who got offended with what Gavaskar said. “That, Mr. Gavaskar your message is distasteful is a fact but I would love for you to explain why you thought of making such a sweeping statement on a wife accusing her for her husband’s game? I am sure over the years you have respected the private lives of every cricketer while commentating on the game. Don’t you think you should have equal amount of respect for me and us?” she asked.

“I am sure you can have many other words and sentences in your mind to use to comment on my husband’s performance from last night or are your words only relevant if you use my name in the process?

“It’s 2020 and things still don’t change for me. When will I stop getting dragged into cricket and stop being used to pass sweeping comments?

“Respected Mr. Gavaskar, you are legend whose name stands tall in this gentleman’s game. Just wanted to tell you what I felt when I heard you say this.” Anushka said in her statement.

This response from Anushka came after Gavaskar said “He wants…he knows, that the way to get better is to practice more” when Virat came into crease. Gavaskar was talking about the lack of opportunities to train during the lockdown. Then he referred, jokingly, to a popular video on social media, a small clip in which Kohli can be seen batting in the driveway of his house with Sharma bowling to him.

At one point, Gavaskar said “during the lockdown, he was practicing only on Anushka’s bowling, that won’t help him”. These remarks from the legendary cricketer irked Anushka Sharma to issue the statement. Soon after Kohli got out in just 1 run which led to a big loss for the RCB team.

Now, in a way of clarifying his statement, Gavaskar said “Aakash (Chopra) and I were talking about very little practice for everybody which has shown in rustiness for Rohit, MS Dhoni, Virat everyone in the first match,” Gavaskar said. “Where am I blaming her? Where am I being sexist? I am only stating what was seen in the video. If somebody has interpreted it (differently), what can I do?”

Where have I been sexist during my commentary? #SunilGavaskar breaks his silence over the controversy involving #AnushkaSharma and #ViratKohli.
Watch this #exclusive conversation with @BoriaMajumdar pic.twitter.com/9OzTbUih0B

Meanwhile, the twitterati came in to support the former cricketer by trending a hashtag “We Support Gavaskar”. Check out some of the tweets under the hashtag :

Its sad to see Gavaskar sir having to explain a blameless comment while Anushka madam gets away with producing back to back Hinduphobic content on Netflix!

Okay😁 now please never ever travel with team.@BCCI this must be ensured that only cricketers visit places while touring no spouse coz we can't see our legend getting disrespected. #WeSupportGavaskar pic.twitter.com/VyoVLAdGfZ

What role @AnushkaSharma have for Indian cricket @BCCI

Is She the team manager, Coach Or a Player?

Why she accompanied everywhere?

Is it because she is some Actress or Team Captain Wife?#WeSupportGavaskar pic.twitter.com/BMRn5vr8E4

They are after #SunilGavaskar's job.

If you think Gavaskar sir did no wrong, please tag @BCCI and write #WeSupportGavaskar.

Let them know what masses think of this controversy so that they don't dare to act against him to appease the handful of elites.

Comment your views on this explanation of Sunil Gavaskar !!

Previous articleEven After Losing, Dhoni Made Fun Of Players “Dropping” Catches !! WATCH
Next articleRajinikanth & Ajith Fans Thrashed This Popular Personality For Blaming Them !!

“Top Star” Prashanth Says “Shrooovv” In His Own Style For His Friend “Karan” !! Watch !!