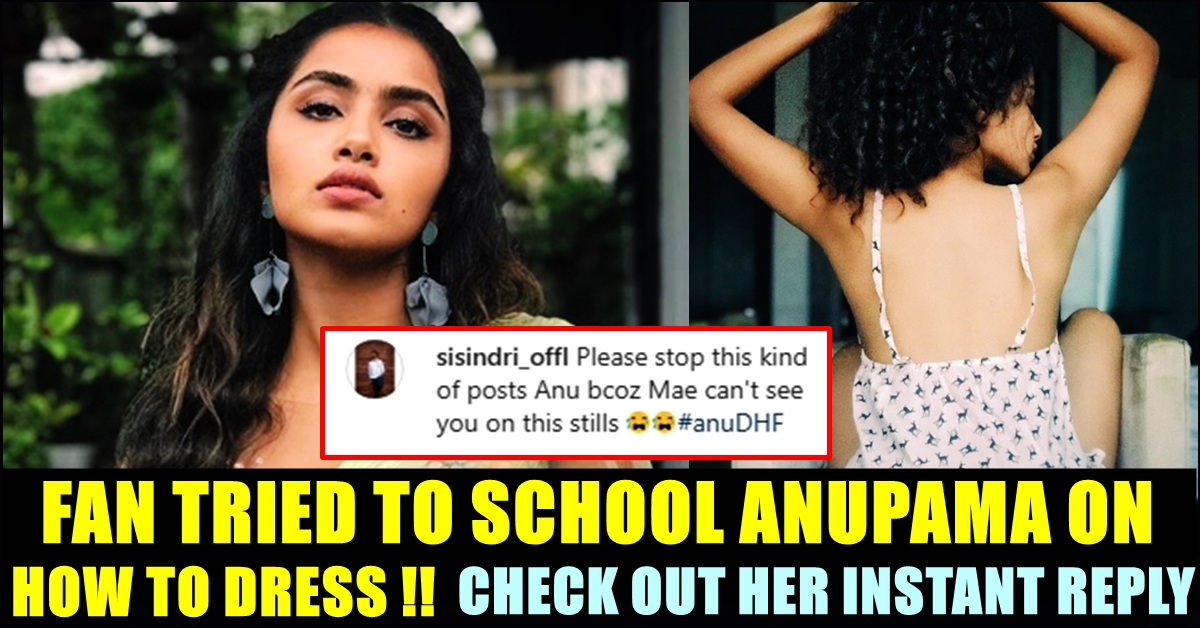 Heroines getting moral policed just because posting a picture of themselves in social media became a practice in this digital era. People who call themselves as fans, often forgetting that celebrities are also individuals and have every right upload posts in their personal social media accounts as per their wish. However, some wouldn’t mind such trolls but there are few who would make such trollers taste their own medicine by trolling them back. There is also a kind where the celebs would give their piece of mind to make the trollers realize their mistake in order to prevent them from doing it further to others. Anupama Parameshwaran falls under that sort.

In a short span of time Anupama won many hearts of the South Indian cinema audience. With very few films she gained so many fan pages in social media which was being maintained by her fans. The actress is also keeping her fans engaged by uploading her adorable pictures in her official Instagram account where she enjoys 76 lakh fans.

She agreed to love herself deeply…….

In one of her most recent post, Anupama came up with a post embracing her curly hair. The actress, in her post defined that a true love will make a guy forget a girl’s curves when seeing her curls. “Love is when her curls make you forget her curves ♾” her post’s caption read.

Love is when her curls make you forget her curves ♾ PS : if my legs and arms worries you… pls stay away brothers and sisters 😬

On seeing this picture from Anupama, many of her followers moral policed her saying that they didn’t expect this kind of picture from her. Pointing out her legs and arms, one of a Tamil based fan said that he loved her more as Malathi and Mary, the characters she done in Kodi and Premam.

Replying to his comment, Anupama apologized to him on the first place for not being like a girl in Kodi or Premam. Further the actress asked him and the others who posted mean comments to let her live her life. Check out the screenshot of her reply :

After the comment, Anupama edited her caption adding “if my legs and arms worries you… pls stay away brothers and sisters 😬”. On the work front, Anupama is all set to appear in “Thalli Pogathey” along with Atharvaa. She also did a direct netflix Malayalam film named as Maniyaraiyile Ashokan in which she worked as an assistant director. Comment your views on this reply of Anupama !!

JUST IN : This Week’s Bigg Boss 4 Eviction Got Leaked !!
Man Who Made Rape Threat To Vijay Sethupathi’s Daughter Released Video !!