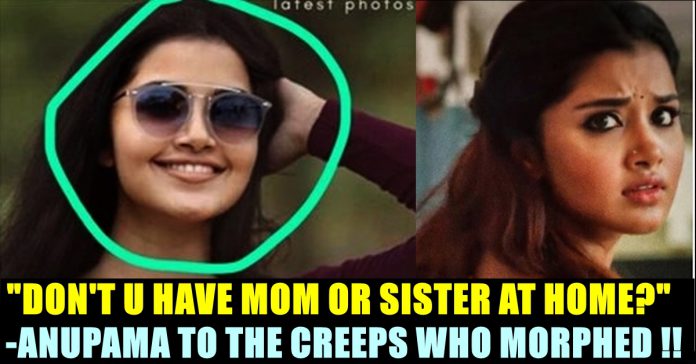 Anupama Parameshwaran who is known for appearing in films like Premam, Kodi got irritated on seeing her pictures getting morphed and expressed it through one of her post. Anupama Parameshwaran is an actress who rose to fame in a short span of time Anupama won many hearts of the South Indian cinema audience. With very few films she gained so many fan pages in social media which was being maintained by her fans.

The Quarantine Challenge #tqc : Caption this ……and I’m gonna give reply to the most interesting ones ♥️😘

However, the actress found herself amidst trouble once her social media account hacked by unknown people. “Some idiot has hacked my account…..just alerting” she wrote in her official facebook account.

Followed by this post, Anupama also shared a couple of morphed pictures of herself and slammed those who created it. She questioned those who find time for this kind of nonsense whether they have sister and mother at home. She asked them to use their brain to do something productive and clarified her fans and followers that she is not the one in the pictures.

“For all the creeps who find time for all this nonsense…. don’t you have mom or sister at home ?????? Use your brain to do something productive and not for all these stupidity ……. just wanted to clarify….” her post in Facebook read.

The actress also shared the same and wrote “Fake obviously, A lot of time for all this non sense huh ??” in her Instagram story. Check out the screenshot of her story below :

Anupama debuted with Premam alongside Nivin Pauly, which was a commercial success. She then had a cameo in James & Alice, a Malayalam movie. Later she forayed into Telugu films with a handful of projects including A Aa, where she played a lead role along with Nithiin and Samantha Ruth Prabhu. Only last year she made her Kannada debut with Natasarvabhouma with Puneeth Rajkumar. She was last seen in Telugu movie Rakshasudu, which is a remake of Tamil film Ratsasan.

Earlier the actress was rumoured to have a relationship with Indian cricketer Jasprit Bumrah. Without any evident connection such as region, language or field of career both the celebrities started to follow each other in social media platforms and both of them liking each other’s post caught the attention of the Internet users who started spreading it.

However the actress denied the speculations of the social media users. According to Pinkvilla’s report, Anupama Parameswaran has said that they are just “good friends”. She even refused the rumour and has said that she is not dating Jasprit and added that such link-ups are common.