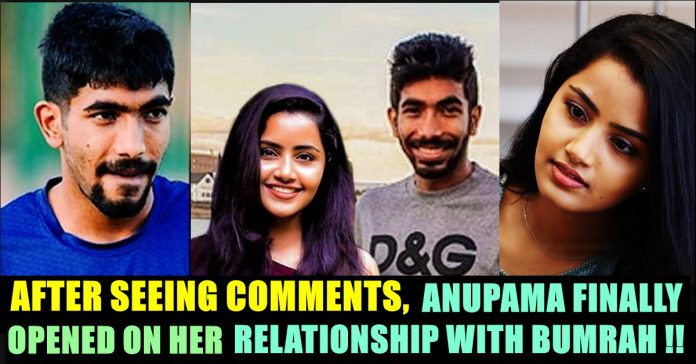 As far as this news surfaced, many fans from social media started commenting Bumrah’s name in the comment section of Anupama’s posts. Even in her latest post of Anupama people started to comment Bumrah’s achievement in one of the World cup tournament.

Yesterday bumrah has taken 4 wickets.. In this pic you are showing 4 fingers… Everything is interlinked…

However the actress finally opened on the speculations of the social media users. According to Pinkvilla’s report, Anupama Parameswaran has reportedly said that they are just “good friends”. She even refused the rumour and has said that she is not dating Jasprit and added that such link-ups are common.

Earlier, Bumrah was also linked with “Imaikka Nodigal” actress Rashee Khanna. However, Rashi had said in a chat show, “I do not know him personally and I haven’t ever met him. I know he is a cricketer, that’s it.”

Bumrah is exhibiting a terrific bowling performance in this ongoing World cup tournament. He took 17 wickets and became the leading wicket taker for India. His consistent yourkers made him the most economical bowler as well. Team India’s bowling performance in tomorrow’s semi finals against New Zealand is very much depends on the 25 years old youngster.

Now the actress is currently working as an assistant director in Dulquer Salman’s debut production. Directed by newcomer Shamsu Zayba, the film will reportedly have Anupama playing one of the female leads along with Anu Sithara and Nikhila Vimal. She is very much known among Tamil fans for the role she done in Malayalam film “Premam”. She also paired with actor Danush in the movie “Kodi”. Jacob Gregory has been cast as the male lead, as per reports.

What do you think on this statement from Anupama ?? Comment your views below !!

Previous articleFor Watching NGK In AMAZON, Surya Fans Got Angry On Shanthanu !! Check How He Handled !!
Next articleSamantha Slammed “Arjun Reddy” Director For His Comment On “LOVE” !! Got Extremely Trolled Back !!

Actor Siddharth who is known for raising voice against injustice that are taking place in the society through his official twitter handle, on Thursday,...