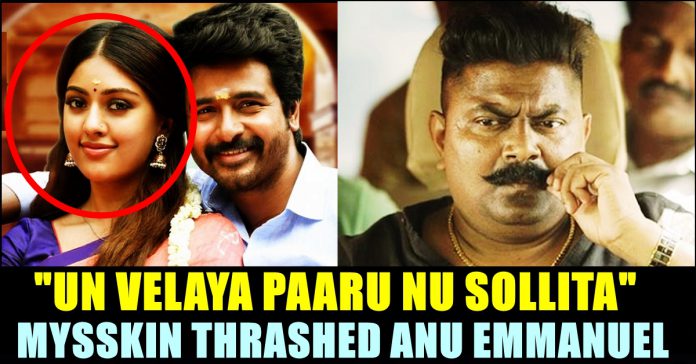 In a recent promotional interview for his film “Psycho”, Mysskin has revealed how he handled actress Anu Emmanuel during the shoot of his “Thupparivalan”. The filmmaker said it while answering to question asked by a host of a Television channel. Mysskin’s “Psycho” hit the screens on the 24th of this month.

Mysskin is one of the prominent filmmakers of Tamil film industry right now. Influenced by seasoned filmmakers such as Akira Kurasowa and Alfred Hitchcock, Mysskin is known for his unique way of storytelling unlike other filmmakers of his era. He debuted to Tamil film industry through “Chithiram Pesuthadi” which became a blockbuster. It is widely believed that he will behave in a furious way during the shoot of his films to make things happen quickly.

In the interaction with Puthiya Thalaimurai , Mysskin participated along with the main leads of “Psycho” Udhayanithi Stalin and Nithya Menen. When the host asked Mysskin to share about the experience of handling two heroines in a single movie, Mysskin said that he didn’t face any troubles during the making of “Psycho”. “But I faced such situation during Thupparivalan times” said the filmmaker.

“Thupparivalan” is a 2017 released film of Mysskin which had actors Vishal, Prasanna, Anu Emmanuel, Andrea Jeremiah in the lead roles. While sharing about the incident, Mysskin said “While we were sitting in an escalator and talking, a small ruckus between Andrea and Anu Emmanuel took place. I intervened and thrashed” said Mysskin who went on explain the incident.

“At that time, Andrea was wearing Jeans and shirt whereas Anu was wearing a Kurta. Andrea asked Anu to watch her step in the escalator as she was wearing a long Kurta. In reply, Anu asked her to mind her own business” said Mysskin and laughed.

“Then I blasted at Anu for behaving that way to a senior most actress than her. While scolding I told her that she is just one film old and Andrea is lot more experienced than her. I thrashed her into pieces which made her to cry” said Mysskin who added that these things will happen when one try to cast two heroines in a same movie.

“Andrea told her that utter most sincerity and tried to explain Anu that she is trying to help her. I was so furious that I wanted to smash a pumpkin on her head” he said to the anchor and made it sure that the heroines acted in “Psycho” are mature and didn’t involve in such acts. Mysskin even suggested the show runners to chopt out the segment he spoke about that issue.

Apart from Thupparivalan, Anu Emmanuel appeared in “Namma Veetu Pillai” of Sivakarthikeyan and several other Telugu and Malayalam films. Now the sequel of Thupparivalan is getting ready and we have to wait and see if Anu gets a part in it or not.