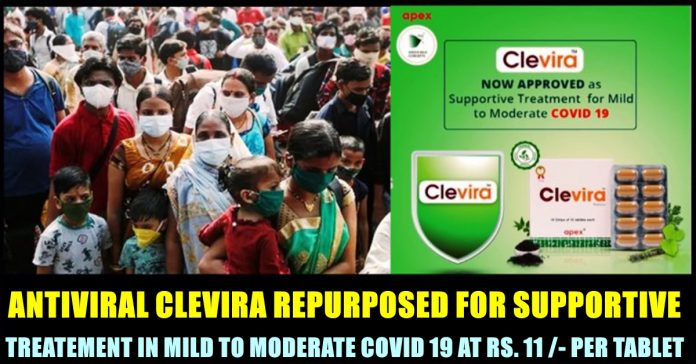 The entire country is fighting the second wave of COVID 19 at the moment. Doctors & Researchers are predicting that the third wave may hit India within 6 to 8 weeks. To combat the deadly disease in order to avoid heavy losses, Indian government has been suggesting people to get vaccinated. Central and State governments in the country are requesting public to stay at home to prevent the spread of the virus. Even if people are leaving home for essential needs, they are requested to take safety measures like washing hands, wearing mask & maintaining social distancing.

Now to prevent people from getting admitted in hospitals and hunting for oxygen cylinders, a drug named “Clevira” which was developed to treat dengue initially, has been repurposed to treat patients who are suffering mild to moderate COVID 19 virus symptoms.

Most importantly, the product is available across India for Rs. 11 per tablet and was initially developed to treat dengue patients in the year 2017. Last year, when the country faced a surge in COVID 19 positive cases, “Clevira” was repurposed as a supportive treatment for mild to moderate coronavirus symptoms. The results that came after conducting a clinical trial on 100 people in May-June last year were “promising”.

The selected 100 people were randomised into two groups with 50 patients in each arm, during the 30 day-trial conducted at Government Medical College Omandurar and Government Estate in Chennai. Both the treatment group received standard ICMR/ WHO protocol treatment for COVID 19. In addition the test group patients received Clevira Tablets twice daily after food for 14 days. The clinical trial outcome was very encouraging and Clevira reduced the time taken for the clinical recovery. It reportedly reduced body pain, normalized respiratory rate and improved the saturation level of oxygen which is more than 94 %.

“Clevira” increases the white blood cell and lymphocyte counts significantly within the normal range apart from reducing the viral load, hence the recovery from all signs and symptoms is much faster. The tablet is safe for liver and kidneys and can be safely used with other drugs. It is proven effective as an analgesic, antipyretic. According to the clinical trial, it can be used as a prophylactic treatment for frontline healthcare workers and primary contacts of COVID 19 positive patients.

Based on the clinical trial, “Clevira” got approval to be used as a supporting measure for treating mild to moderate COVID-19 symptoms by the Ministry of AYUSH. Clevira is first of its kind to get this approval in India.

Clevira is available for people across the country as tablets and syrup.

Check out some of the reviews from public that surfaced on Amazon site :

Previous articleJudge’s Frustrated Reply To Lawyer Who Sought Anticipatory Bail For MADAN !!
Next articleHave You Ever Seen The Original Version Of This Epic Vivek Comedy ??

Only those living under a rock must have missed the crazy viral photo of Sunny Leone and Mammootty from the sets of Madura Raja. Posted...

Anchor Bhavana who is known for hosting shows in Vijay television, got literally fed up on seeing the contestants of the ongoing Bigg Boss...