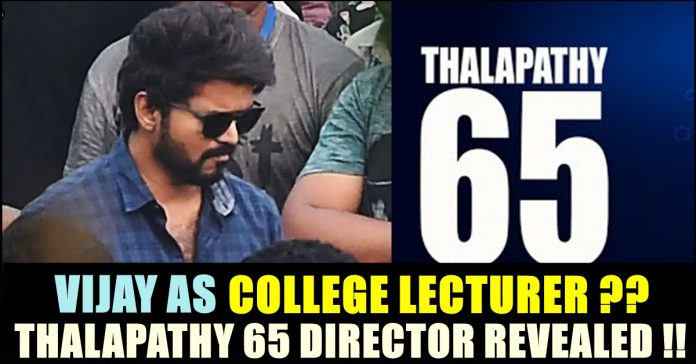 Now the fans of the actor already started predicting the director of his 65th film. Earlier it was rumoured that director Perarasu who already gave two blockbuster hits with the actor is going to reunite again with him in his 65th movie. As Lokesh Kanagaraj’s directorial is currently is in initial stage of production, many thought that it is too early to predict his next film’s director.

To our surprise, the recent buzz says that the 65th film of the actor is going to be directed by Magizh Thirumeni who is known for directing films like “Thadam”, “Meaghaman”, “Thadayara Thaaka” etc. The director’s recent work “Thadam” impressed audience in big time as it contained intense plot with engaging content.

Thie film which is going to be directed by Magizh Thirumeni is believed to be a action oriented film in which Magizh excelled in previous ventures. Vijay heard the script from Magizh recently and nodded to go further in the pre production process according to sources.

If this is True !! Please bring @MusicThaman on board 🖤🖤✨✨✨✨ The kind of form he is in now, the THEME MUSIC and Bgm will be like Ppaaaahhh Goosebumps Guaranteed !!!! Just Imagine #Thalapathy's SloMo Shots with Thaman's RR 😎 #Thalapathy65 #7YearsofMegaBBThuppakki pic.twitter.com/1Jmlg5YTsh

Vijay is currently working for his next release in Delhi and the actor is rumoured to be featured in a role of a college lecturer according to Indiaglitz. Thalapathy 64 is going to talk about the flaws in educational system and the death of NEET aspirat Anitha is also going to take place in the film according to sources.

Produced by XB film creators, the film has musician Anirudh as composer and Vijay Sethupathi is going to do the role of main antagonist. The film also has an ensemble casting which raised the expectation level of the fans. As far as Thalapathy 65 is concerned, fans are very much excited to know that Magizh is going to direct the film which is evident in social media platforms.

What do you think on this line up of actor Vijay ?? Comment your views !!

TV actress Anandhi who is known for debuting in popular Tamil serial "Kanaa Kaanum Kalangal", went on to act in a number of Tamil...