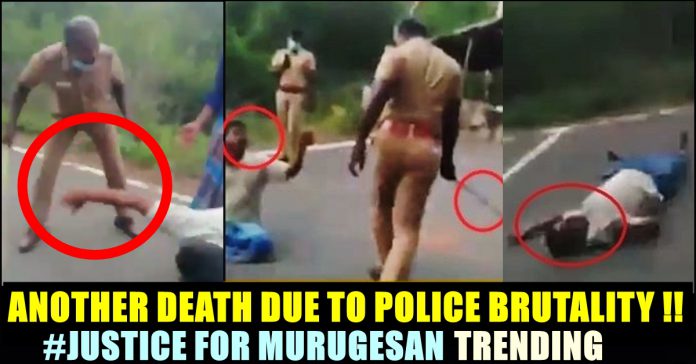 Followed by Jayaraj and Fenix, a father and son duo who died due to police brutality in the year 2020, a 40 year old man named Murugesan who belongs to Edapatti of Salem died after being beaten up by the Police. The incident took place on the evening of Tuesday and it was declared that he was dead in the morning of Wednesday. He was taken to the Salem government hospital fainting at the Pappenaickenpatti check post where he got assaulted. Salem Police have registered a case against a special sub-inspector of Police named Periya samy and arrested him.

The viral video shows the Police officer beating the victim black and blue, despite of people who accompanied him tried to stop him. The video is being shared widely with people condemning the inhumane behaviour of the Police officials even after the issue that took place surrounding the death of Jayaraj and Fenix.

Murugesan is a farmer and also running a shop at Thumbal road. He who lives in Edapatti near Yethapur in Salem, went to Kallakurichi on Tuesday by bike along with his friends after consuming alcohol, said reports. While returning to their village in an inebriated state, they were stopped by Police who were involved in checking vehicles. Murugesan started arguing with the Police for stopping his vehicle and didn’t stop even after being stopped by his friends.

Sub Inspector Periyasami started attacking Murugesan with the lathi he was holding which caused the latter to faint. He fell down on the road and it is said that the victim sustained injuries on his head. Murugesan’s friends took him to a Thumbal Primary health centre where he was provided first aid. Doctors of Attur Government Hospital suggested to admit him at Salem Government Hospital as his health condition was worsening. On Wednesday Morning, it was declared that Murugesan was dead.

A criminal case was registered against Periyasamy and he was arrested. Further investigations are on and a video which was recorded by Murugesan’s friend is going viral in social media platforms. “Heartbreaking video from Atthur. Murugesan died today, succumbing to police inflicted wounds. யார் தடுப்பதையும் பொருட்படுத்தாமல் அந்த நபரை சாகுமளவுக்கு அடிக்க வேண்டிய நிர்பந்தம் என்ன? What can justify such police brutality? Acid test for new TN govt’s professed policies.” said actress Kasthuri in her tweet with a hashtag “Justice for Murugesan” trending in the micro blogging social media site.

#JusticeforMurugesan @ikamalhaasan warned the the Government well in advance. And now just like Jeyaraj and Bennicks murder, Murgesan has been murdered by Police in Salem. And the reason is – He travelled out of Salem to consume liquor and returned back driving. pic.twitter.com/GqKcZUGZqT

Another case of police brutality.
Another life lost. 😢pic.twitter.com/AO6qQap2ap#JusticeForMurugesan

Tamilnadu Should be Upset Murugesans death After He Got Attacked By Police At Salem , Attur and idayapatti Check Posts!!!! #JusticeForMurugesan pic.twitter.com/0zXeH9IKdv

What kind of attitude is this of police? Will you kill someone mercilessly like this?
When there is an argument,someone gets such a punishment that he loses his life?
The man kept pleading in front of the policemen but those people did not stop. #JusticeforMurugesan pic.twitter.com/m3g4XFTE2b