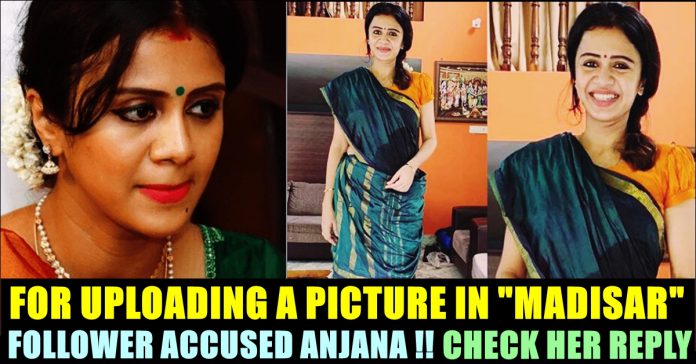 For posting a picture wearing “Madisar” saree, one of a follower of TV host Anjana Rangan labelled her as a castest and apologized immediately after getting a reply from her. Not many days ago, actress Riythvika cleared the air on the caste based remarks against her. Read : Riythvika’s Clarification Regarding Her Reply In Instagram !! Now, screenshot of this reply from the popular TV host Anjana is trending in social media platforms.

On 2nd of July, Anjana who is pretty much active in the photo posting social media platform, uploaded a couple of pictures of herself wearing “Madisaar Saree” with a caption saying “Maami mode on 😜 goodvibesonly #blessedday #divine” in her official Instagram account. Tne picture was captured by her husband Chandramouli who is an actor debuted through Prabhu Solomon’s “Kayal”.

On seeing the attire and caption of post, one of her follower named as Neelamegam Neelu asked Anjana why she is so much obsessed with the caste pride. “Yan epadi caste veri puduchu alayura” read his comment which was backed by 15 other people.

However, Neelamegam who didn’t see that coming, immediately apologized to her for his harsh comment and said that he is a fan of her from her Sun music days. The boy who called Anjana as “Akka” said that he committed such mistake due to the disappointment on not getting a reply from her for his messages. “I have been watching your shows since 2008. Please forgive this brother for hurting you” he said.

Recently Anjana made a female follower of her to shut who asked what did she achieve to get 1.2 million followers in Instagram. Anjana who saw the comment, gave her a humble reply saying “Nothing much than being in this industry, doing just my work for 12 years. I didn’t achieve anything ! Nope” she wrote as her reply. Capturing the screenshot of the same, she wrote ” “This!! My base is not out of short term fame !! I have worked hard, steadily and slowly with values and ethics for 12 whole years”  in her story.

Anjana Rangan is currently spending her lockdown period with her sweet family which consists her husband and two year old son Rudraksh. She is also keeping her followers engaged with her stylish pictures from her candid photoshoots. After working in sunmusic for 10 years, Anjana is now working in Zee tamil and is also hosting cinema functions such as audio launch and success meet. Chandramouli, on the work front, is expected to be seen in “Nan Seidha Kurumbu” and “Party” post lockdown.

Madras High court ordered Sterlite copper plant in Thoothukudi to remain closed on Tuesday and the political leaders of all the parties welcomed the...