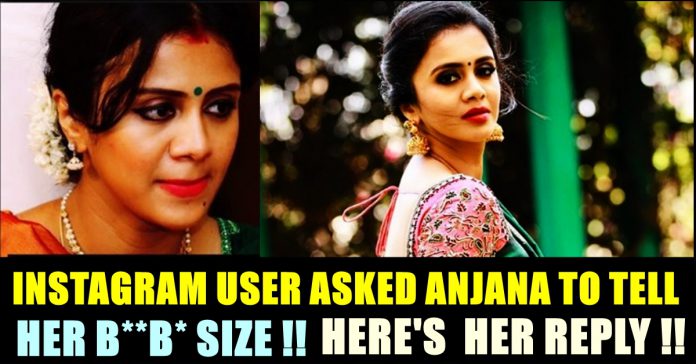 The number of abusive texts that are being received by females in social media platforms from abusers is increasing in vast number. Knowing that there is no severe laws created yet to put them behind the bars for sending a text in social media, people, mostly men who owns a smartphone are sending abusive texts to their opposite text without giving a thought about the consequences.

We have seen many female celebrities reporting about cyber bullying from their social media accounts. In the list of Tamil female celebrities who exposed the abusers to public in a way of teaching them the right lesson, the latest one to join is Anjana Rangan, a popular anchor who is known for her TV appearances.

In this digital era, celebrities choosing social media to interact with their fans and followers instead of conducting a fans meet is common. VJ Anjana who is very much known among the Television audience for hosting shows, conducted a chat session through her official Instagram account in which she enjoys more than ten lakh followers. Being a busy compere, Anjana effortlessly balancing her personal and professional which is evident through her Instagram timeline.

Today, in the chat session she conducted, many of her followers came up with valuable questions and few lauded the host for the way she is raising her child. Few of them also asked about her makeup routines.

Check out some of the answers provided by Anjana below :

Meanwhile one of her follower who seems to be an Instagram user who doesn’t care about sending abusive texts to celebrities, asked the 20 year old anchor about the size of her breast.

Anjana who could have simply avoided the text without answering to it, took time to teach him a good lesson to prevent him/her from sending such texts to anyone in future. She answered by writing “A lot bigger than your peanut sized brain!” screenshot of which is doing rounds in social media.

Check out the screenshot of Anjana’s answer to the user below :

It is high time for such people to realize that sending obscene texts to random celebrities is going to get them exposed in no time. Recently actress Nanditha who is known for appearing in films like Attakathi, Puli exposed a guy to her followers. (Also Read : Nanditha Exposed Screenshots Of This Random Guy Who Abuser Her)

VJ Anjana Rangan gave birth to a baby few months back. Actor Chandramouli and Anjana became proud parents to a baby boy which made the anchor to take a break from her professional career. The couple named their son as Rudraksh. Anjana who enjoys quite a huge fan following in social media due to her unique way of anchoring in Sun Music as video jockey, did shows for the music channel for nearly 10 years. Now she also started hosting audio launches and movie functions.

This befitting reply from Anjana would have made online abusers who saw her reply to think twice before asking such lame questions. What do you think on this reply made by the anchor ?? Comment your views below !!

Previous articleAjith Gifted Bike To This Director After Listening To His Story !! WATCH
Next articlePraveen Kumar Revealed Why He Attempted Suicide !!

Canteen Worker Of IIT Got Arrested For Filming Student Inside Bathroom !!

A 22 year old canteen worker from IIT Bombay got arrested for allegedly filming a girl student while she was using bathroom. Officials of...

Director Shankar who is known for making some of the significant films in Tamil cinema history has been subjected to non bailable warrant by...

Former Bigg Boss contestant and actress Vanitha Vijayakumar uploaded a couple of tweets raising questions regarding the media reports on Chithra's demise. She who...