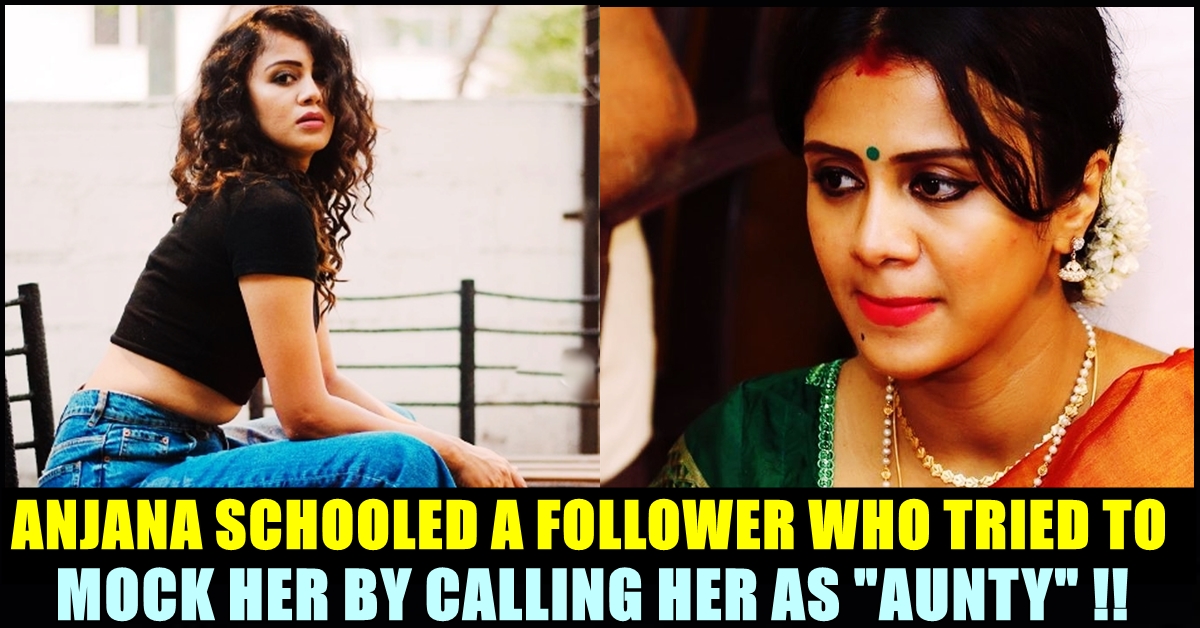 Popular Television anchor Anchor Anjana, while interacting with her followers through a question and answer session in Instagram, schooled a follower who tried using the term “Aunty” to mock her. She also answered to many other followers of her, including to the one who questioned on her BIGG BOSS participation.

Anjana Rangan, popular video jockey who is known for hosting shows and reality programs in Television, recently conducted a question and answer session with her Instagram followers. Many questions regarding her looks, works and future ventures were asked by her followers. Among the many answers she provided to her followers, the way she schooled a follower who tried to humiliate her by calling her as “Aunty” has grabbed the Internet’s attention.

Anjana Rangan is pretty much interactive with her fans and followers in social media platforms. The 31 year old host who enjoys quite a huge fan following in social media due to her unique way of presenting shows, did programs for Sun Music for nearly 10 years. She got married to actor Chandramouli of “Kayal” fame in the year 2016. The couple gave birth to an adorable son and named him as “Rudraksh”.

Anjana is engaging herself by posting pictures of herself from her photoshoots that were conducted in her terrace and in other places around her house. Most of the pictures in her Instagram timeline were captured by her husband Chandramouli.

When she asked her 1.3 million followers to ask her questions, a follower wrote “Ena Kekalam Aunty kita” (What should I ask to this Aunty) and Anjana replied to him writing “Enakku kooda than unna asingama kekkanum pola irukku.. Kelu.. Yosichu Kelu” (I myself feel like scolding you in bad words, think and ask)

He further replied asking whether she got pissed off for being called as an “Aunty” and the anchor replied to him saying that there is nothing wrong in him calling her as “Aunty” but using the term to insult someone is wrong. “A woman is capable of inspiring people, The older she gets, the more lives she touches” Anjana’s reply read.

When a follower expressed his/her wish of Anjana participating in Bigg Boss show, the VJ said that she couldn’t stay away from her son for that long.

Being a busy compere, Anjana effortlessly balancing her personal and professional which is evident through her Instagram timeline. Now, sincethis lockdown, the beautiful looking Video Jockey is impressing her followers with her elegant look and stylish poses. Check out some of her recent post below :