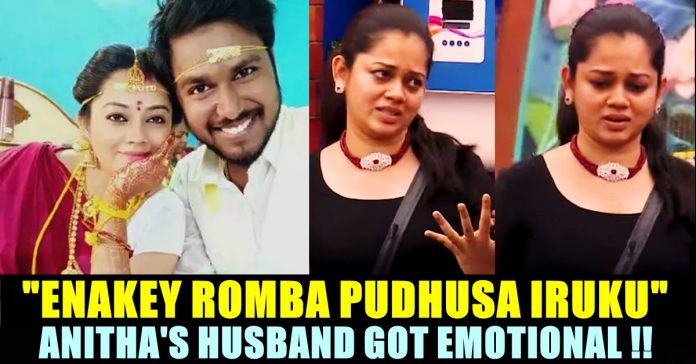 So far 20 days have completed and the show has seen one elimination. Veteran actress Rekha got eliminated in the very first week due to the less number of votes she received from the audience. Since the start, contestants of the house are very much involved in performing the task to avoid getting eliminated.

Anitha Sampath, a news reader by profession is also active in performing tasks and in interacting with her fellow housemates. She had a rift with Suresh Chakravarthy in the first week over a comment he made about news readers. However, the duo got solved and won hearts of the audience by performing together for “Chinna Machan” song in the dance task.

Now, her husband Prabhakaran who earlier came in to defend his wife from the harsh comments of dance choreographer Sathish krishnan, posted an Instagram story saying that he is missing his wife like never before. “Today marks the 30th day. Since the days we were just lovers, we never been like this without seeing each other for this long. This is the first time.” said Prabha in his post.

“This is very new to me. I really miss my chellama” he added in his story. Check out the screenshot of his story below :

Earlier, one hearing the life story of Anitha in “Kadanthu vantha paadhai” task, dance choreographer and actor Sathish who is known for appearing in Vaaranam Aayiram, Achcham Enbathu Madamaiyada posted a series of tweets criticizing the news reader. He said that she is talking too fast and he was forced to recap the episode to hear it clearly. He even said that he couldn’t get that sad feel while hearing her story.

Countering these tweets of Sathish, Prabhagaran posted a story asking Sathish to stick to dancing. “You people would never care about other people’s starving if you grew up not knowing about it. This is how you would make fun of other’s pain and starving if you had grew up that way. P.S : If you are a choreographer, stick to dancing. Don’t be so arrogant” the story of Prabhakaran read.

In a task, Anitha said that she took tuition for children even after getting a proper job. She left it only after earning a bit more. At that time of the period, Anitha met her husband Prabhakaran who came from a similar background of her. After involving in a romantic relationship with him for three years,the couple got married last year.

Rajinikanth’s Emotional Speech On Kalaignar’s Death !! He Slams EPS For Not Attending The Funeral !!

Actor-turned-politician Rajinikanth on Monday slammed the Tamil Nadu government run by the AIADMK – and took on Chief Minister Edappadi Palaniswami over multiple issues...

As soon as seeing the clarification video released by actress Sai Pallavi regarding the recent controversy she got caught, actress sum politician Gayathri Raguramm...