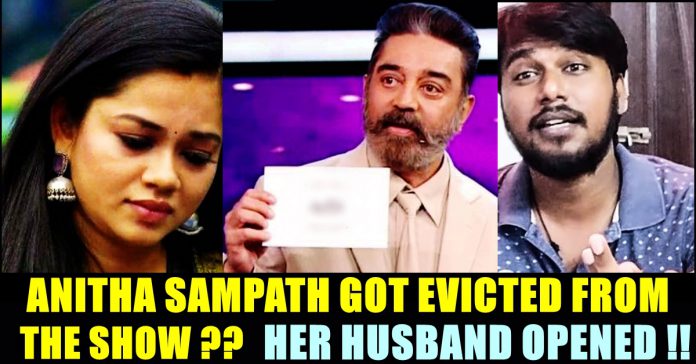 Prabhagaran, husband of Bigg Boss contestant Anitha has been uploading posts in his official Instagram account about missing his wife. On the 30th day of the show, Prabha uploaded a post saying that he never missed his wife since they were lovers for 30 long days. Now, as the show went past 60 plus days, Prabhagaran came up with another post which made people to think that Anitha got evicted from the show.

Anitha is in nomination along with Aari Arjunan, Ramya Pandiyan, Aajeedh, Shivani Narayanan, Sanam shetty and Aranthangi Nisha. Aajeedh, Shivani, Anitha and Nisha were the front runners for the elimination. Now, a story uploaded by Anitha’s husband has made audience to think that Anitha is going to et eliminated. However, he posted another story in his Instagram account clarifying that he just expressed his emotion and didn’t known about the details of the elimination.

Anitha Sampath, a news reader by profession is pretty much active in performing tasks and also in interacting with her fellow housemates. She had a rift with Suresh Chakravarthy in the first week over a comment he made about news readers. A statement she made about widows being part of Hindu rituals was lauded by Kamal Haasan.

Anitha also became the main cause for the elimination of Samyuktha. After winning the topple card by convincing her co-contestants, Anitha nominated Samyuktha and stayed safe. “Her strategy is to stay safe till the finals without getting nominated. When it comes to open tasks, she would accuse the weaker contestants to play a safe game. She also behaves rude at times” said Anitha while nominate Samyuktha. Bigg Boss announced that Samyuktha is getting nominated instead of Anitha as a result of which the actress and model got evicted.

The way she questioned Rio in the phone call task also impressed a number of followers. Now, Prabhagaran, her husband uploaded a story in his Instagram account. The story showed a boy waiting in front of the calendar to meet his love. “Can’t wait to see you” wordings in the picture said.

This post of him made many people to think that Anitha is going to get eliminated from the show next week.

#Anitha 's husband shared this pic on instagram.
Look like channel informed him she is going to evicted. 😔😔#BiggBossTamil4 Unmai ah erukumo pic.twitter.com/Q9sIjCukfC

Cryptic Message by Anitha's husband in IG says it all. Just 3 days is marked in the picture#Anitha has been evicted I guess for voicing out her opinion😒

Woah. Appo confirm thaan.. I saw few tweets about anitha is being evicted too.. Sunday papoom..

Responding to such speculations, Prabhagaran made a clarification in his very next post. Prabha said that he just said that he is missing Anitha. “We won’t know about the elimination now. So don’t get yourself tensed” he said in his story. “Makka na just Anitha miss panrenu potten.. Elimination ah nu ippo theriyathu.. So tension aavadheenga” his story read.

Comment your views on Anitha getting evicted this week !!