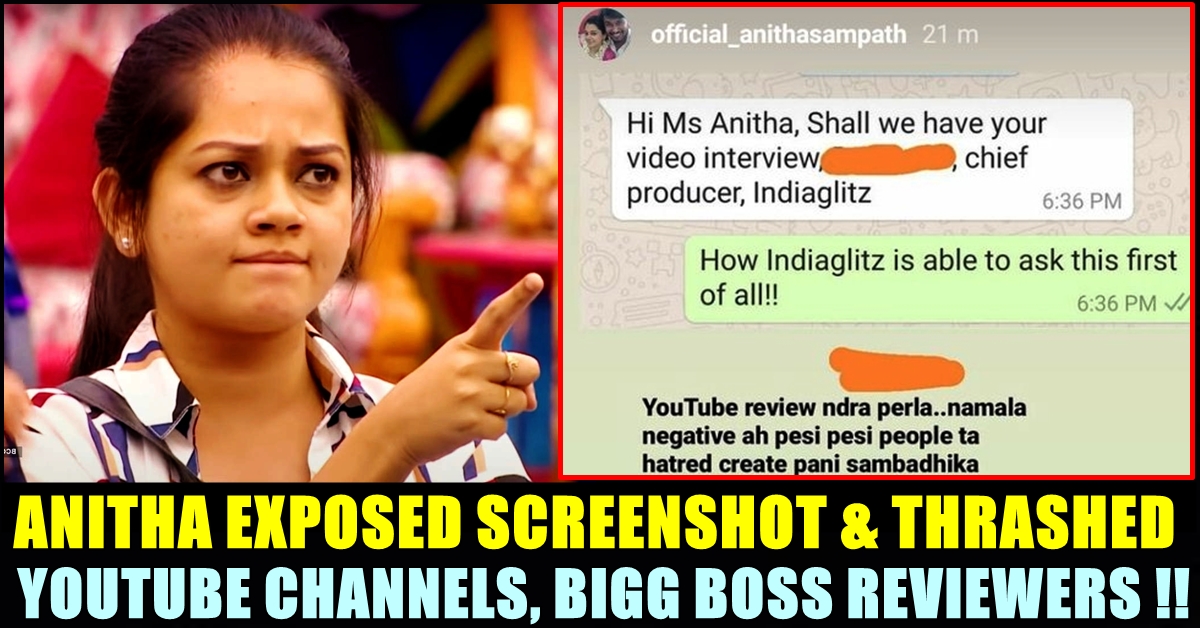 Ever since coming out of Bigg Boss house, Anitha refused to appear in the interviews being organised by private youtube channels and is interacting with her fans and followers through her official Instagram account. She is also sharing about her Bigg Boss experience through her own youtube channel “Anitha Sampath Vlogs”. Now, in one of her recent Instagram stories, the former news reader has thrashed youtube channel for spreading negativity against Bigg Boss contestants in the name of Bigg Boss “review” and requesting them for an interview later.

After coming out of Bigg Boss house, contestants who took part in the show are pretty much busy interacting with their followers in social media platforms. Replying to trolls became a part of their daily routine as they gained both love and hate through the 100 days reality game show.

Anitha Sampath, a news reader by profession also interacting with her followers and answering to their questions regarding the reality game show that streamed on Vijay TV. On Thursday, Anitha shared a screen shot of a whatsapp chat and showed her followers how a youtube channel which reviewed the show approached her for an interview.

The screenshot showed the chief producer of a private youtube channel approaching Anitha for a video interview. “How Indiaglitz is able to ask this first of all” Anitha’s reply to the message read. Sharing the screenshot, Anitha said that youtube channels are earning money by creating hatred against Bigg Boss contestants. “They are also requesting for an interview with us after the show’s end. People must understand the money mindedness behind the youtube reviews too” her story read.

“This msg is what i got from Indiaglitz.. Other youtube reviewers also called me.. ellaryum nalla keten !!” she added.

“Some Youtube reviewers are celebrated like hero heroines.. they say we went to bb for fame and money.” she further said. “Are you reviewing for social service ? You are also doing it for fame, right ?? They earned more than us. Youtube channels earns lakhs and lakhs for one review video..! Including the payment they get for ads” Anitha said to her followers.

This story of the Bigg Boss contestant went viral among her fans and followers. A follower tagged producer Ravindran who was reviewing the Bigg Boss show and wrote “I personally dedicate this lovely msg to Producer Ravinder. You did a biased review!!!”

I personally dedicate this lovely msg to @libraproduc Ravinder.

Earlier, Anitha said that the female contestants who participated in the Bigg Boss show are going through huge stress due to the negative comments they are receiving from the social media users. She also made trollers to realize that they are not going to earn anything by abusing the contestants. “You will start minding your business after posting a negative comment about an individual in social media but the one who is in the receiving end couldn’t forget it for a long time. It will hurt them” she said in her post.

“I Was Just 12 Years Old While Acting In That Film” – Actress Opened For The First Time
Legendary Tamil Director’s Thoughtful Opinion On “Grand” Weddings !!
Advertisement