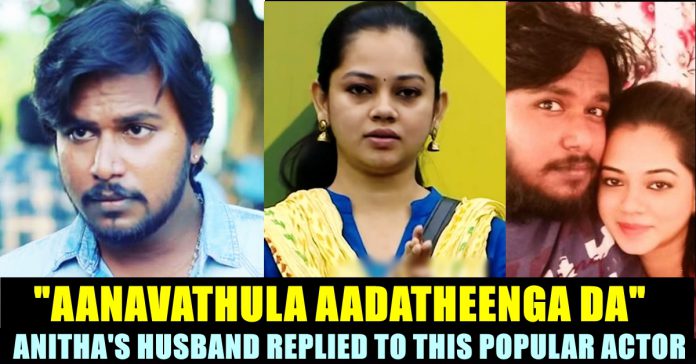 Prabhakaran, husband of current Bigg Boss show contestant Anitha Sampath came in to defend his wife from the harsh comments of a popular celebrity who has been expressing his views regarding the 100 days reality game show through his official twitter account. In the fourth season of Tamil BIGG BOSS show, contestants were asked to tell audience and to their co-contestants about the hardest path they came through in their life. The task was named as “Kadanthu Vantha Paadhai” by the Bigg Boss.

Anitha Sampath, while sharing about her life story, said that she always had a financial issue since she belongs to a middle class family. The news anchor who worried of not having an own house, said that she always got confused while filling her address in any kind of official form. “I got a job offer for a home tutor. But the place was near Perambur. So, I had to travel from Tiruvallur to Perambur and then walk for an hour. Though auto and other transports were available, I couldn’t afford it. I even walked by wearing torn footwear. I wasn’t able to buy a new one.” said Anita which made the housemates go emotional.

Anitha said that she took tuition for children even after getting a proper job. She left it only after earning a bit more. At that time of the period, Anitha met her husband Prabhakaran who came from a similar background of her. After involving in a romantic relationship with him for three years, she got married to him last year. While narrating her story, Anitha said that middle class people are the luckiest as they got the opportunity to understand life and sail through it in a better manner. She further asked youngsters to get married only if they feel comfortable. “Don’t trouble your parents during the marriage. They would do whatever you demand without hesitation. But later, they would suffer for it” she said.

On seeing this episode, dance choreographer and actor Sathish who is known for appearing in Vaaranam Aayiram, Achcham Enbathu Madamaiyada posted a series of tweets criticizing the news reader. He said that she is talking too fast and he was forced to recap the episode to hear it clearly. He even said that he couldn’t get that sad feel while hearing her story.

He further said that Anitha would demand secret room even if she gets eliminated.

The dance choreographer also said that Anitha’s story was not emotional and said that people will run away if she tells stories like these.

“You people would never care about other people’s starvation if you grew up not knowing about it. This is how you would make fun of other’s pain and starving if you had grew up that way. P.S : If you are a choreographer, stick to dancing. Don’t be so arrogant” the story of Prabhakaran read.

Responding to this post, Sathish, posted a tweet mocking both husband and wife. He said both of them are crying to seek sympathy. He wanted them to have BP tablets.

Comment your views on this online rift between Prabhakaran and Sathish !!

Previous articleFans Blaming KL Rahul For The Unexpected Loss Of Punjab !!
Next articleWATCH : Dhoni’s Open Statement About The Continuous Loss !!

Video Jockey Anjana brushed off a baseless rumour that emerged due to a report made by Polimer news and expressed her frustration over the...