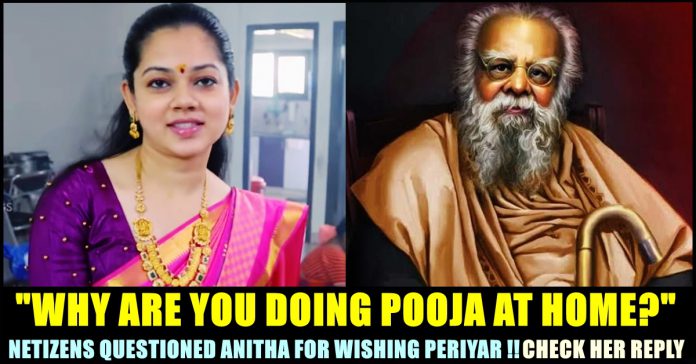 On the 142nd birthday of social reformer Periyaar, former news reader Anitha Sampath who is known for participating in the fourth season of Bigg Boss reality game show, uploaded a video in her Instagram space to convey her wishes. The video showed Kamal Haasan talking about how he sees Periyaar while appreciating her for raising her voice against widow women performing rituals. She termed Periyaar as her “Leader” through the post which made many to question her about herself devoting Hindu gods. Anitha came up with a fitting reply shut such trollers once and for all.

Periyar has been one of the pioneers of great movements in Tamil Nadu. He is celebrated by everyone across the nation for his progressive thoughts and speeches. His principles sparked a new era in the Tamil speaking state. Many eminent leaders emerged following his ideologies. Being an atheist, Periyar has impressed huge number of people through his ideologies. His reforms brought massive changes in the state and MK Stalin, Chief Minister of Tamil Nadu announced that his birthday will be observed as Social Justice Day in Tamil Nadu hereon.

Among the many celebrities, politicians and influential personalities, Bigg Boss star Anitha also came up with a post conveying her wishes to the reformer. In the video, Kamal Haasan could be seen saying that Periyaar is a “social reformist”, despite of all the colours that were painted on him by several group of people. He also appreciated Anitha for representating Periyaar by taking his ideology forward.

Adding the video, Anitha said “Periyaar is our pride. He is our leader, no matter how many criticisms emerges against him. We are here to take your ideologies forward. Periyaar is a leader who couldn’t be forgotten even after 1000 years” through her caption. Check out her post below :

On seeing this post of her, a follower tried to mock Anitha by mentioning about a Pooja vlog she did for her youtube channel. “By the way Anitha, your vlog on Aadi Amman Poojai was nice” he sarcastically said to which Anitha replied back saying “thank u. loving periyar doesn’t need a certificate that we
dont pray god. I pray god which will not affect others. paguthariva dhan avar kita kathukuren! Sami
kumbidakudadhunu paguthu ariya dhan solli thandhar. Inuma aravekada irukinga”

She further uploaded a story iterating a quote said by Periyaar. “Rationalism is not against those who say “I pray to God” but against those who sees discrimination among people” the quote of Periyaar said. Adding this, Anitha wrote “To all those who asked why i visit temple and do pooja at home”. Here’s the screen shot of her story :

In her next story, Anitha said that she has been wishing Periyar on his birthday, ever since she created an Instagram account and added that she sees 10 people scolding him every time. “I will be posting Birthday wishes to him for the coming years too” she said in her next tweet.

Previous articleHashtags Against Periyar And Modi Are Trending On Their Birthday!!
Next articleVideo Of A Man Making Kids To Take Oath On Getting Married Only To Brahmins In Future Received Flak !!

Genelia Replied To The Viral Video Of Her Husband & Preity Zinta !! Priceless

Actress Genelia who recently grabbed the attention of Tamil social media by shaking her legs for the most famous "Vaathi Coming" song, now came...