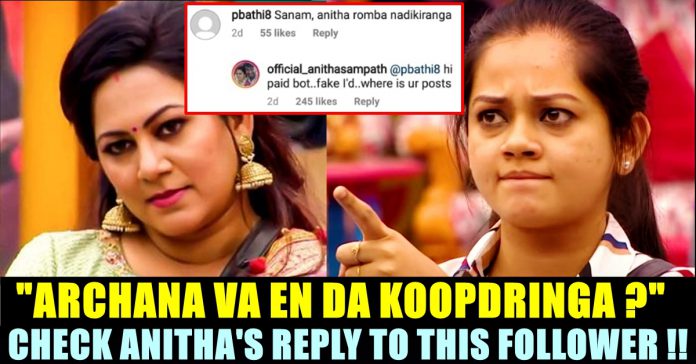 Anitha Replied To Follower Who Asked Her Not To Mingle With “Anbu” Gang !!

The shooting of “Bigg Boss Kondattam” which celebrates the participants of the 100 days show got completed and the contestants are busy uploading the pictures from the event. Balaji Murugadoss, Sanam shetty, Anitha Sampath, Ajeedh, Gabriella, Aari Arjunan and many others have been uploading pictures that were captured in the show which was hosted by anchor DD.

Meanwhile, to the posts of Anitha Sampath, a number of followers advised her not to mingle with “Anbu” and asked her to stay away from Archana. Anitha uploaded a groupie with Archana, Samyuktha, Ramya Pandiyan, Shivani Narayanan, Aranthangi Nisha and Rekha. In another picture, she could be seen posing with Rio Raj, Som, Archana and Rekha.

Check out the posts below :

On seeing the selfie with Rio, Som and Archana, a follower asked her not to join with them and branded them as “bad”. To him, Anitha replied saying that everyone are good and informed him that the game got completed.

Another follower named “Sanam shetty cutie official” asked why Vijay TV invited Archana to the “Bigg Boss Kondattam” show and to that user, Anitha replied saying “let’s love everyone bro, game is over”

“I Lost 4 Crores Because Of Atlee” This Producer Says “Mersal” Is A Copy Of “Moondru Mugam” !! WATCH !!