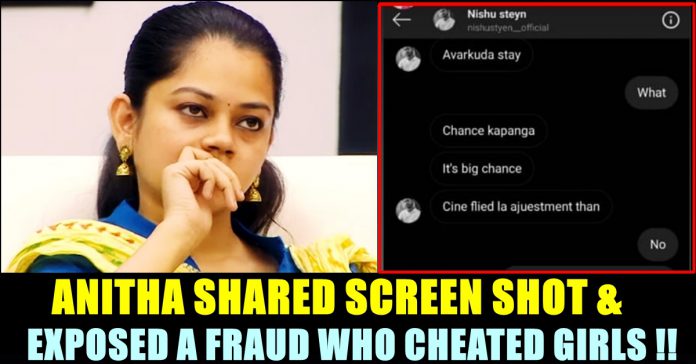 Anitha Exposed A Fraud Who Cheated Girls In The Disguise Of A Casting Director !!

Anitha Sampath who rose to fame among Internet audience through the Kamal Haasan hosting Bigg Boss show, came up with an Intsgaram story exposing a guy who has been cheating girls in the pretext of getting them film opportunities. She asked her followers to report the person’s Instagram account in order to terminate it from the photo/video posting social media account. She also exposed another guy who seemingly sent abusive text to her.

Anitha is known for raising voice against online harassment and bullying. As soon as coming out of the Bigg Boss house, Anitha involved herself in reforming the abusers by expressing how an individual would feel while receiving mean comments in social media platforms. Now, through her Instagram account, she exposed a miscreant who pretends to be a casting director. It is notable that the Bigg Boss star shared a chat of the same guy days ago.

Anitha Sampath, a news reader by profession, is currently running a youtube channel. She is also involved in interacting with her followers by answering to their questions regarding the reality game show that streamed on Vijay TV. Ever since coming out of the house, the actress is facing so much abuse and hate from the users of Instagram. She also exposed a number of abusers and people who sent inappropriate texts to her in Instagram through fake ids in social media.

Now, sharing the screen shot of a guy’s profile whose username reads as Nishu Steyn, Anitha asked her 5 lakh plus followers to report his account. The bio of the fake id says that Nishu is a Model, actor, dubbing artist and Casting director. “This is a fake id of a concerned person Nishu. Please do report to save others. Some frauds like him in the name of casting director will misguide you. Pls don’t believe them. Got to know about this id through my friend” Anitha wrote in her story.

Days ago, Anitha shared the same story and uploaded a screen shot of the culprit’s chat with a girl. In the chat, he could be seen insisting the receiver to do “adjustments”. Sharing the screen shot, Anitha said “Friend sent this screen shot of her Insta chat… don’t trust such fraud guys” Anitha said in her story.

The Bigg Boss celebrity also uploaded another story which showed a picture of a guy. “Girls be careful when you meet this guy. future rapist. Show your mom what you wrote, she will be happy” Anitha said in it.

During her Bigg Boss stint, Anitha got appreciated by Kamal Haasan for her speech on superstition in India and how it demeans every women in the country. Her progressive speech impressed thousands of people and it made her to stay inside the house longer.

Ravi Ashwin Answered Who Is His Favourite Among Vijay & Ajith !! S J Surya Has Something To Say !!

On Friday, Ashwin did a #AskAsh session on Instagram where he replied to questions from his fans. During the Q and A session, when...