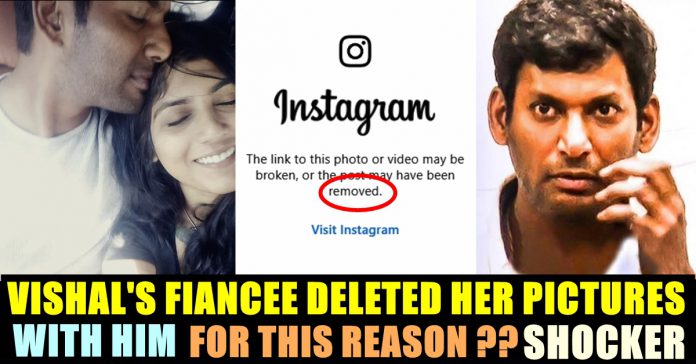 Vishal, the most eligible bachelor of Kollywood town, gave sigh of relief to all his well wishers by announcing that he is going to marry Anisha Alla Reddy. Now to our shock, the couple allegedly broke up according to some of the news portals.

Despite rife rumours of dating Sarkar actress Varalaxmi Sarathkumar, Vishal shared his engagement picture with the Hyderabad based girl named Anisha. Anisha is the daughter of a Telugu businessman.

Anisha who is an actress and has featured in films such as Pellichoopulu and Arjun Reddy has posted a photo of her with Vishal with a long caption 6 months ago. On the post, She wrote that she yearns to live up to all of the dreams, goals and challenges she has put up for herself. She revealed that she finally found somebody to go down the path of life with, loving him and life with true passion. She added that she looks up to Vishal for all that he stands for and for all of his heart.

Unfortunately, it seems that the couple has moved on as the posts of them together in Instagram were deleted by Anisha. She is an active Instagram user which is evident through her posts.

However, actor Vishal has not deleted their engagement post from his twitter in which he wrote “Well the pics says it all. #anVShall.anisha s my fiancé.happy and blessed.luv u Anisha.”

According to the India Today report, the Industry rumours suggests that the wedding has been called off. However, neither Vishal nor Anisha made an announcement regarding the rumours. The marriage was supposed to take place on October 2019 and this news shocked the film industry.

Vishal and Anisha became close when she seeked help from him for one of her projects. They fell in love with each other after dating for a while. The reason for their break up has not been revealed yet.

A day after their engagement announcement, Anisha shut down a troller who said that she made Vishal to accept to marry her with the money she have.

Anisha had a fitting reply to shut the troll. Replying to the comment, the Arjun Reddy actress wrote, “If you think that it was money that made Vishal fall for me, clearly you have no respect for who he is. Keep a little faith in life sometimes, it goes a long way .. take care (sic)”

Well, they seemed to make a nice couple but let’s see what plans the future has for them !!