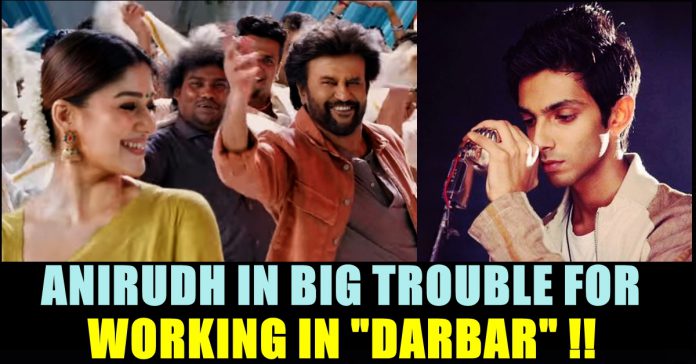 Anirudh In Big Trouble For Composing Music For Darbar !!

Superstar Rajinikanth’s “Darbar” is all set to release during Pongal holidays. As soon as the trailer of “Darbar” released, it impressed many fans across the world. Apart from Rajinikanth, Nayanthara and Suniel Shetty, The film also features Prateik Babbar in a negative role and Rajinikanth is returning on screen as a cop after 25 years. Rajinikanth played the role of a cop in 1992 released Pandian. The background score and soundtrack were composed by Anirudh Ravichander, while cinematography and editing were handled by Santhosh Sivan and Sreekar Prasad, respectively.

Anirudh became one of the sought after music composer of Kollywood in no time. His songs for Darbar was released and is being celebrated by Tamil cinema fans across the world. It is notable that he is currently working for Ulaganaayagan Kamal Haasan and for Thalapathy in Indian 2 and Thalapathy 64 respectively. It is notable that the musician already worked for Ajithkumar in Vethalam and Vivegam.

Now, to our shock, for composing music for Rajinikanth’s Darbar, Anirudh found himself in a big trouble it seems. Tamilnadu Music directors association leader and Music director Dheena has condemned Anirudh for using music artists from foreign to compose music for Darbar.

According to News 7, he has said that there is a strict law to use music artists from Tamilnadu even if a music director wants to employ foreign artists. Dheena has said that Anirudh must have used at least 450 members from Tamilnadu. He also asked Film Employees Federation of South India to take appropriate action against the “Why This Kolaveri Di” composer.

This news shook the social media and the composer are very much worried. Meanwhile Superstar Rajinikanth fans are alleging that these kind of accusations are plans from the enemies of Superstar to ban the movie from getting released. Anirudh was introduced by Danush (son-in-law of Rajinikanth) in Tamil film industry through the film “3” which was directed by Aishwarya Danush. Through that film Anirudh became a young sensation as the song “Why This Kolaveri Di” went viral worldwide.

Watch the speech of Dhina in the press meet here :

Check out some of the comments for this news here :

Previous articleDirector Revealed Why He Couldn’t Work With Actor Vijay !!
Next articleNayanthara Got Severely Criticized For Doing This !!

After Seeing The Wedding Pictures Of Their Daughter, Parents Committed Suicide

The news of parent’s suicide by consuming poison at their house at Kunnathur near Avinashi in Tirupur district on the night of September 4,...