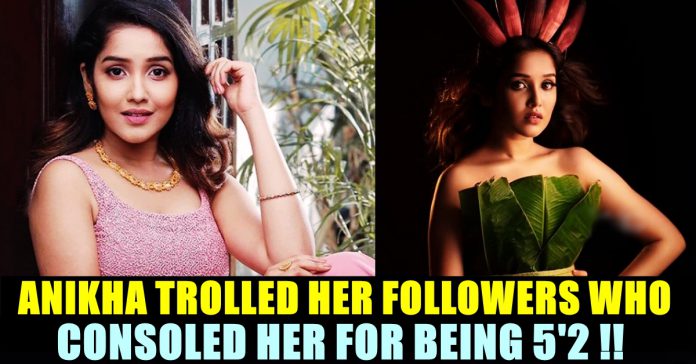 “Viswasam” fame Anikha Surendran who is pretty much active in social media platforms, trolled people who consoled her regarding her height in Instagram. After disclosing about her encounter with a fan, Anikha said that he/she commented on her height and asked her to grow. She seemingly received lot of messages from her 15 lakh followers consoling her regarding her height. However, the 16 year old actress trolled them back by saying that she wants them to be fine too as she is fine with her 5 feet 2 inches of height.

Child actress Anikha Surendran who is known for sharing screen space with Ajith Kumar and Nayanthara in a number of films, recently turned 16 and is pretty much busy participating in photo shoots while signing films. She who is enjoying one million plus followers in Instagram, has uploaded 292 posts in the photo/video posting social media platform so far.

Anika is known among Tamil audience for her appearance in films like “Viswasam”, “Ennai Arinthaal” as Ajith kumar’s daughter. In “Naanum Rowdy Thaan”, she did the role of younger version of Nayanthara. Most recently, she acted in “Queen” web series directed by Gautham Vasudev Menon as Late chief minister Jayalalithaa’s younger version.

She who is expected to play lead roles in the films that are going to be made in South India in near future, is already being compared with the looks of “Lady Superstar” Nayanthara. With her unique attires and International level makeovers, Anikha is competing with the top heroines of Indian film industry as far as her social media posts are concerned.

On Tuesday, Anikha uploaded a story in her official Instagram account sharing about an experience she went through while meeting a fan. The fan who said that she did well in “Viswasam” film, advised the actress to get taller as she is way too shorter. “Someone came up to me today and said I did a great job in Viswasam and proceeded to tell me that I’m short af and need to get taller. This is why I don’t like going out in public” her post read.

Lot of her followers started consoling her after seeing this story of her it seems. They consoled the actress saying that it is “okay” to be short which the actress thought is sweet. However, she trolled them saying that she feels fine with her 5 ‘2 and wanted all her followers to be fine too.

“Everyone in my DM’s keeps consoling me saying it okay to be short which is really sweet but I’m fine being 5’2 but I just need you all to be fine too lol” her next story read.

Here’s the screen shot of her next story :

Most recently, while answering on actresses being slut shamed, Anikha said ““I have never been harassed” and added that she never let things like slut shaming get her. To the people who are going through such things, Anikha said “People are gonna say what they are gonna say and there’s nothing to do about it but You know what you are” she said.

Before that, when a follower asked her to behave according to her age, Anikha said ““It is my Instagram and my body, I can do wherever the hell I want”

To Help Her Boyfriend In Career, This Girl Staged A Robbery In Her Own House !! BIZARRE !!

In what makes for a bizarre incident, a girl in Rajkot robbed her own house to fund the pilot training program of her boyfriend....

J.K Ritheesh who is a former Member Of Parliament and actor died today due to cardiac attack at Ramanathapuram. He was last seen in...

WATCH : Once Again Asal Kolaar Is In The Receiving End!!

Once again Asal Kolaar caught the attention of Bigg Boss viewers for the physical attachment he shows with the female contestants of the Bigg...