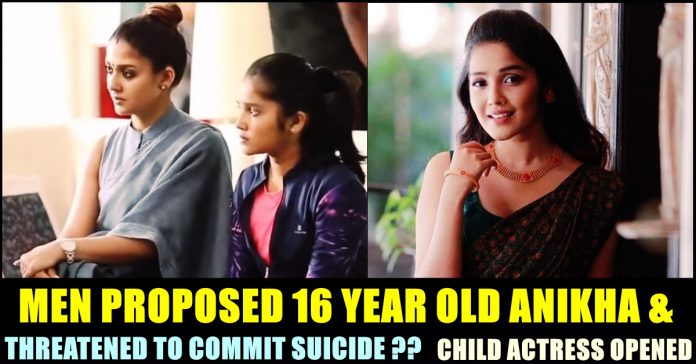 16 year old child actress Anikha Surendran, while conducting a question and answer session in Instagram, opened about the scariest proposals she received ever. The “Viswasam” actress said that she received mails from fans who would say that they would commit suicide if she doesn’t accept their proposals. She also answered to many other questions of her followers which included regarding her insecurity about her height.

Anikha Surendran who is known for sharing screen space with Ajith Kumar and Nayanthara in a number of films, recently turned 16 and is pretty much busy participating in photo shoots while signing films. She who is enjoying one million plus followers in Instagram, has uploaded 295 posts in the photo/video posting social media platform so far.

Anika is known among Tamil audience for her appearance in films like “Viswasam”, “Ennai Arinthaal” as Ajith kumar’s daughter. In “Naanum Rowdy Thaan”, she did the role of younger version of Nayanthara and acted as her daughter in a number of films including “Bhaskar The Rascal” in Malayalam. Most recently, she acted in “Queen” web series directed by Gautham Vasudev Menon as Late chief minister Jayalalithaa’s younger version. She recently performed in an advertisement along with Bollywood Superstar Amitabh Bhachchan as well.

Apart from garnering lakhs of likes in Instagram by uploading her pictures from photo shoots, Anikha is also known for interacting with her followers. On Saturday, she conducted a chat session with her followers saying that she is going to answer the most stupidest questions ever. One of her followers asked “What would you do if a die hard fan of yours would propose you and say that he is gonna suicide if you wouldn’t accept it”

Replying to the question, Anikha said “The weird thing is that, that sad situation has actually happened to me. I have gotten emails mentioning “that”. It’s been scary but I just . . I don’t know, ignore it”

Aww poor @anikhaoffl_ 🥺♥️ sorry you had to deal with it. Hope you're better 🥺♥️♥️♥️ pic.twitter.com/H8EUijfPkW

To another user who asked about her height and shared about his/her insecurity, Anikha replied saying “I am 5’2, I used to be insecure about my height. But then I decided that there are perk of being short. You can stand front in pictures, you can wear men’s clothes and make it look like a dress. You just have to embrace it and just be short. I guess there’s nothing you can do about it”

yeaaah!! there's no use being insecure about the height 💯♥️ well said @anikhaoffl_ ♥️♥️😍👏🏻 pic.twitter.com/Or9st99Qr9

She who is expected to play lead roles in the films that are going to be made in South India in near future, is already being compared with the looks of “Lady Superstar” Nayanthara. With her unique attires and International level makeovers, Anikha is competing with the top heroines of Indian film industry as far as her Instagram posts are concerned.

When Sivakarthikeyan Improvised A Dialogue About Losing Father In His Film !! WATCH

A video of Sivakarthikeyan sharing about the struggles he faced due to the absence of his father since his teen days made people extremely...

With everything turning digital nowadays, couple who are going to get married are very much interested in conducting separate photoshoots apart from making an...