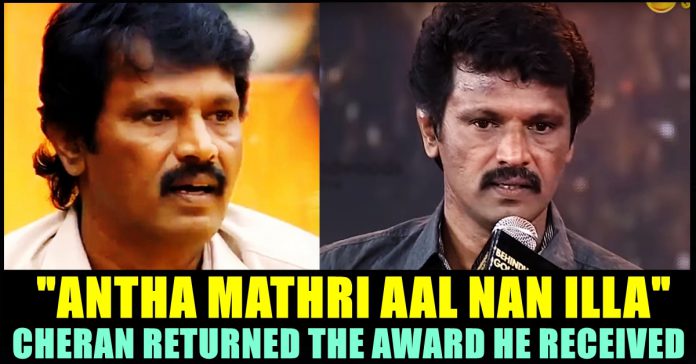 Cheran, the man who is known for his works in Tamil film industry, has got emotional and gave back the award he received from his master K.S Ravikumar in an award function. The filmmaker who is also a seasoned actor, has appeared in a film named as “Rajavukku Check” as protagonist. Along with Cheran, actor Irfan played the role of an antagonist whereas Srushti Dange, Sarayu and Nandana Varma acted in the supporting roles. Since the release of the film, Cheran is very much involved in promoting the film through his social media account.

The film began its shoot in early 2018 but production was briefly stopped owing to an industry-wide strike. The entire shoot, barring one song, was over by May 2018. After so many struggles, the film managed to get its release in 24th January of 2020. The film is against the criminals who are causing violence against women such as rape and harassment.

Now after a week of the film’s release, Cheran, the four time national award winner has posted a tweet in his official twitter account in which he has nearly sixty thousand followers. In the post, Cheran said that he is giving back the award as Behindwoods, the channel which gave him the award, denied to review his film “Rajavukku Check”

“I am returning the medal you gave me. I am not a person who kneels down in front of people for a living after losing respect and honor. I am not a bird which becomes a prey for tricks but a bird which born and raised from fire. You might beat my film by not reviewing my movie but you can’t beat me” read the tweet of Cheran who also posted a screenshot of a message he sent to an official of Behindwoods.

Cheran, the one who won four national award for his filmmaking skills, surprisingly participated in Bigg Boss house and shocked everyone by lasting in the game show for 91 long days. The last film he helmed was ‘Thirumanam’ which released earlier this year.

On his work front, Cheran has said in Bigg Boss house that he is going to direct Vijay Sethupathi in his next film. He also revealed that Vijay is one of the main reason for his participation in the Bigg Boss house.

Previous article“You Belong To DMK?” Asked Follower To Anjana For This Reason !!
Next articleSanam Shetty Exposed The Intimate Whatsapp Chat Of Tharshan !! WATCH

A virtual war took place between "Varisu" and "Thunivu" team on Friday. 7 screen studios, main distributors of the film came up with a...

Arya endorsed a tweet of a fan who compared actor Vijay's dancing skills with the dialogues uttered for "Dancing Rose" in the film "Sarpatta...