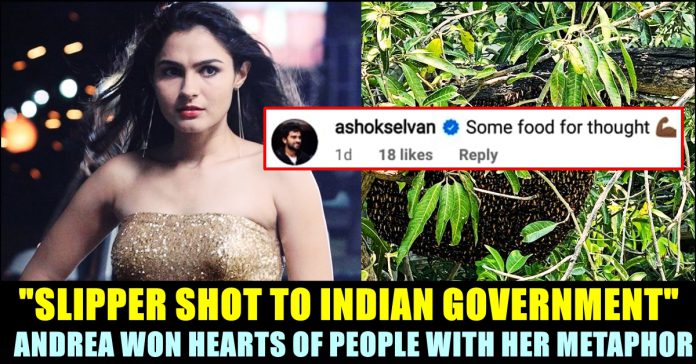 The struggle being faced by the migrant workers of country India due to this lockdown situation is colossal. Protests and negotiations to make them reach their home safely is taking place in daily basis but there is no appropriate solution so far. Recently, A 47 year old migrant worker named as Anil Shankar collapsed and died due to sun stroke in Atkuru of Andhra Pradesh. He along with 17 other migrant workers are on their way back home on foot from Chennai.

Earlier, Sixteen migrant labourers were crushed to death by a goods train in Maharashtra after they fell asleep on the tracks. The accident happened between Jalna and Aurangabad in the Nanded Division of South Central Railway in Karmad police station area of the Aurangabad district. Many other deaths and injuries are taking place as migrant workers are trying to reach their home on foot due to the non-cooperation of the government. A recent news suggested that migrant workers fought with each other to gain food.

Videos of migrant labours getting beaten by police officers while protesting to get a solution are also doing rounds in the social media platforms. Now, among very few cinema celebrities who raised voice for the migrant labourers in our country, actress and singer Andrea Jeremiah, uploaded a post in her official instagram account and is being lauded by her followers for the way she conveyed the message on how important migrant workers are for our country.

The actress, through her post, compared the massive number of bees which resided on a mango tree outside her window with the migrant workers who are suffering to reach their respective houses. Andrea who woke up to a massive colony of bees on the mango tree right across her balcony, made few calls to relocate them without harming them. However, the actress ended up realizing that one of the two options she had is to call the pest control who would solve the problem by killing all the bees. The other option she had is to learn to live with them.

Despite of the fear of getting stung by the enormous number of bees, the actress said that she can’t imagine killing them all just to feel safe. “I feel a great sense of responsibility toward these creatures, simply because they are such an important part of our ecosystem.” Andrea said through her post who further said that if bees goes extinct, humans are the next.

Yesterday, I woke up to a swarm of bees right outside my window. I ventured out to investigate and found this massive colony of bees on the mango tree right across my balcony. I have nothing against bees, but I don’t want to get stung either, so I made a few calls, trying to find the best possible way to relocate the bees without harming them. Ultimately I was left with only two options- call pest control who would solve the problem by killing all the bees, or just learn to live with them. I am terrified of flying insects, yet I can’t imagine killing thousands of bees just so I can feel safe. I feel a great sense of responsibility toward these creatures, simply because they are such an important part of our ecosystem. If bees go extinct, we humans are next. This story is about bees, but it’s also about the migrant worker crisis in our country. If I can feel responsible for a beeswarm outside my balcony, how can the government not feel responsible for millions of stranded migrant workers across the country ? The Queen bee is smart, she knows she is nothing without her worker bees, she needs them to keep the beehive in good working condition. I guess we humans could learn a lot from bees 🐝 #lockdown #covid19 #india #takeresponsibility

She made sure that the bees are fine now and she has a mesh around all her windows. She said that the bees are trying to come in at night and going away by the morning. Check out the screenshot of her comment here :

This post from the actress won the hearts of many of her followers, including actor Ashok Selvan’s. He wrote “Some food for thought” in his reply comment and many other followers appreciated the actress for her thoughful post.