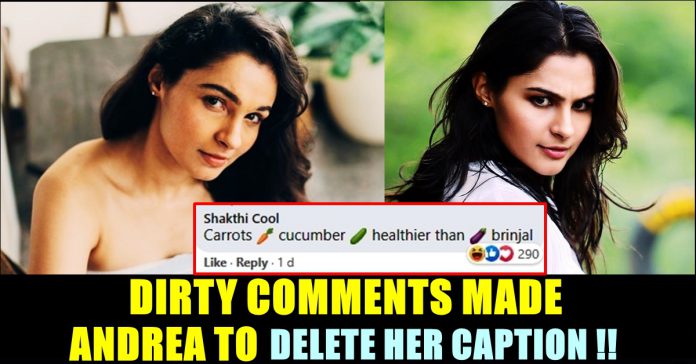 Actress Andrea who was last seen in actor Vijay’s “Master”, is pretty much active on social media platforms by uploading her daily routines and professional updates. On Wednesday, after receiving enormous number of inappropriate comments for her Instagram post, the actress edited her caption to make them stop surfacing. The actress is currently enjoying 22 lakh plus followers for her Instagram account.

Singer and actor Andrea Jeremiah who got an opportunity in Gautham Vasudev Menon’s “Pachchaikili Muthucharam” to introduce herself, has acted in many films in Tamil industry. She is known for her appearance in high profile movies such as Vishwaroopam, Aayirathil Oruvan, Aval, had sung a number songs for various leading music directors as well.

Before “Master”, She was seen in Vettri Maran’s 2018 film Vada Chennai in which she played the role of Chandra. The entire movie plot revolves around the emotions of Chandra and the actress impressed the critics and audience with her performance. In “Master”, Andrea played the role of a professor in the film. She who teaches “Archery” to students, used her skills to take down a number of lorries which belongs to the villain’s gang towards the climax.

On Wednesday, the actress who is pretty much active in social media platforms, came up with a casual post in her official Instagram account. Uploading a couple of pictures of herself wearing a purple tops, the actress wrote a caption saying “Mood” and added an emoji of brinjal.

As soon as the post surfaced in her timeline, enormous number of fans came up with inappropriate comments trolling the actress. Some of the top comments with highest number of likes contained vulgarity and double meaning contents.

Andrea who uploaded the emoji to denote the color of her attire, edited her caption in Instagram as soon as seeing those kind of gross comments from men in social media.

Here’s the post of the actress with a new edited caption :

Check out some of the comments that surfaced after she edited the caption :

These kind of comments irked a number of social media users as well. “after seeing some perverted comments… judging a person’s mindset by vegetables.. clearly indicating the sexual frustration of the people.. no wonder that rapes are being encouraged” wrote a follower to express his dejection over the regressive comments.

On the work front, Andrea is going to be featured in various Tamil films including “No Entry”, “Vattam”, “Maaligai”, “Kaa”, “Aranmanai 3”, “Pisaasu 2”.

The most awaited reality game show "Survivor" got inaugurated recently with action king Arjun hosting the show. Some of the popular faces such as...